4BC Flips the Switch and Moves to 882 AM 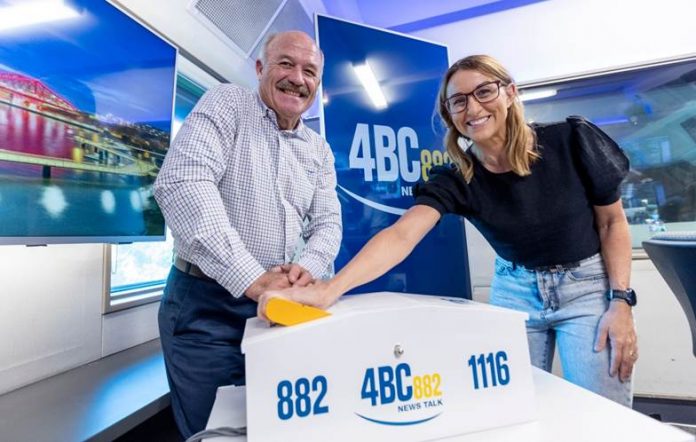 Brisbane radio station 4BC has “flipped the switch” and swapped frequencies with sister station 4BH, moving to 882 AM in a move designed to give the audience a clearer and better listening experience.

4BC Breakfast presenter Neil Breen was joined in the studio by the “King and Queen of Brisbane”, rugby league legend King Wally Lewis and former Olympic swimmer Hayley Lewis (pictured), who together had the honour of flipping the switch.

4BC Content Manager, Max Dudley, said: “4BC is committed to local programming, which is why over the past year we’ve added six local voices to our Brisbane lineup.

“Now we now want to give our audience the best listening experience for all of our programs. 882 AM receives less interference when commuting and reaches areas in South-East Queensland that have had difficulty with the frequency higher up the AM dial. Plus, 4BC Eight-Eighty-Two just sounds better, so it’s a win for us across the board.”

In recent weeks, 4BC has run a major awareness campaign, with on-air promos featuring Neil Breen and a print advertising campaign. The station will also be giving away $882 a day to lucky listeners in a daily Breakfast competition.

The frequency swap comes just weeks after 4BC announced it was expanding its on-air lineup with the appointment of Brisbane’s Sofie Formica as the new Afternoons presenter.

This follows the “live and local” ramp-up of 4BC’s presence in Brisbane, with the appointment of Neil Breen in 4BC Breakfast, Scott Emerson in Drive, Peter Psaltis hosting Wide World of Sports, and Bill McDonald and Spencer Howson rounding out the lineup on Weekends.