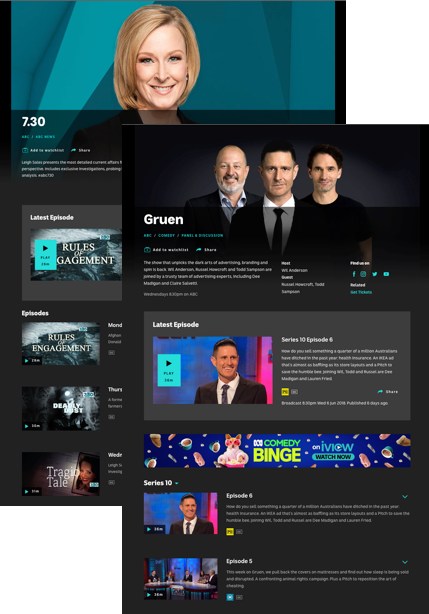 The Australian Broadcasting Corporation has marked the 10th birthday of ABC iview by releasing a major update of the free video-on-demand (VOD) service, delivering new features and improvements for audiences across Australia.

The major updates to ABC iview include:

The update coincides with the ABC iview drama binge throughout June and July, featuring the Australian premieres of Killing Eve, City and the City, Apple Tree Yard and The Tunnel series three.

ABC iview Manager Sally O’Donoghue said, “The major refresh of the ABC iview experience makes it easier to find all of our great shows and our growing catalogue of complete series, including Mystery Road and Killing Eve. The new and improved ABC iview not only looks fresher and cleaner – it’s also much simpler to search for a program and to find everything from your favourite shows on the same page.

“The ABC is immensely proud of iview and its engagement with Australian audiences, built up over the past 10 years. Thank you to all our industry partners and the Australian public for their creative energy and support. We will continue to listen to audiences and innovate with iview and other ABC on-demand services to provide more of our distinctive and engaging content, free to all Australians.”

Milestones for the iview service include:

The major update of ABC iview will be rolled out to connected TVs at a later date.