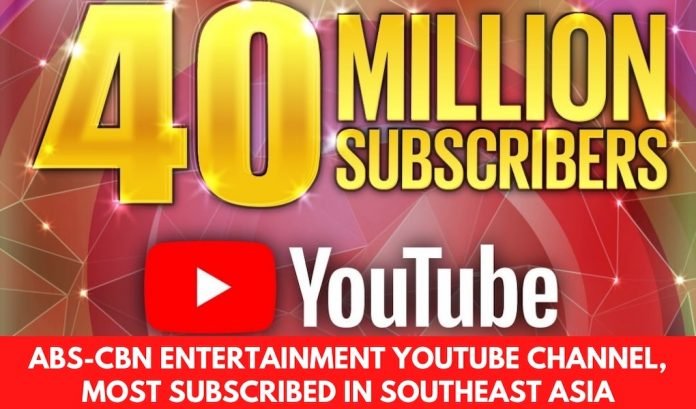 ABS-CBN Entertainment is still the most subscribed YouTube channel in all of Southeast Asia as it achieved another milestone by hitting 40 million subscribers on the popular video streaming platform.

The YouTube channel currently has over 53.5 billion lifetime views as of June 2022, according to Tubular Labs, one of the most trusted global video measurement and analytics platforms.

As the country’s biggest content provider, ABS-CBN is now offering its Made for YouTube exclusive shows on a special weekend primetime block via Kapamilya Online Live on YouTube.

Feel the ‘kilig’ and good vibes from Maris Racal and Carlo Aquino in ‘How to Move On in 30 Days’, the first YouTube co-production in the Philippines, which has already garnered over 20 million combined views since its premiere. Catch the series on Saturdays at 9 PM.

Join Alora Sasam at 10:30 PM for the fun roving quiz show ‘IQ Ang Nagwagi’, where she visits ABS-CBN shows and surprises Kapamilya stars by quizzing them about random tricky questions.

Go behind-the-scenes with the ‘It’s Showtime’ family at 10:45 PM for ‘It’s Showtime All Access’, where the hosts and staff play fun games, raid each other’s dressing rooms, and ask amusing questions.

Get relatable love and life lessons in ‘Dear MOR: Celebrity Specials’ at 11pm, featuring the voices of Karina Bautista and Aljon Mendoza, Kiara Takahashi and Benedix Ramos, and Vivoree Esclito and Zach Castañeda.

Meanwhile, cap-off the weekend by enjoying a night full of music on ‘One Music Play PH’. Watch intimate live performances from ‘The Music Room’ and ‘Gold School’, where multi-talented Filipino artists perform and share the stories behind their songs, and feel the concert vibes in ‘Yeng Constantino: Salamat sa Sampung Taon’ and ‘Double Hearts Digital Concerts’ at 9 PM every Sunday.

ABS-CBN’s efforts to continue to serve with entertaining and inspiring stories boosts the company’s transition into being an agile digital company with the biggest online presence among all media companies, and a growing list of digital properties that appeal to a wide array of audiences.