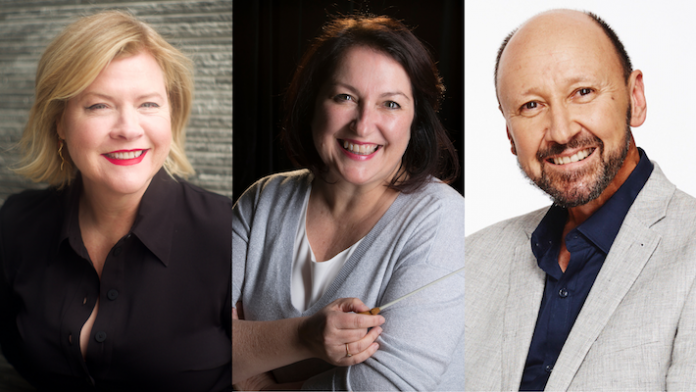 Glenn Daniel was a multi award-winning journalist and broadcaster who reported on and presented news that shaped our world for four decades. He was the news director of four major Sydney radio stations, winner of the Brian White Memorial Award, and co-host of Smooth FM breakfast in Sydney. He was well known as a champion for young radio professionals getting a start in the industry and was a guest and mentor at AFTRS since 1995.

Receiving the degree on behalf of Mr Daniel was his son, Mark Daniel, who said: “My father was so proud of his work at AFTRS and spoke so highly of his experience as a teacher. His impact on radio and radio newsrooms was significant and his legacy is further solidified with this honorary degree.”

Nerida Tyson-Chew is an Australian composer, conductor and orchestrator, principally working in screen music, with a prolific career of unmatched longevity and creativity across a diverse portfolio of work spanning feature films, television dramas, children’s productions, documentaries and wildlife films. At the APRA AMCOS – AGSC 2020 Screen Music Awards, she was acknowledged for her Distinguished Services to the Australian Screen, for her long-term career as a composer in diverse forms including film, TV dramas, children’s programs and documentaries.

Accepting her degree in person was Ms Chew, whose compositions were used throughout the ceremony, said: “I’m so thrilled to receive this incredible acknowledgement of my body of work and for this profession, which I love so passionately. It’s simply wonderful that our nation’s most prestigious film school is recognising a career in music scoring.”

Mandy Walker is a cinematographer who has been working across TV, documentary, commercials and feature film since 1989. She has more than 30 screen credits including Mulan, Hidden Figures, Parklands, The Well, Lantana, Australia and Elvis. She is on the board of governors of the Academy of Motion Picture Arts and Sciences and the American Society of Cinematographers. She’s a Hall of Fame honouree of the Australian Cinematographers Society and was made Member of the Order of Australia in 2021. She has made a significant creative contribution to Australia as well as paved the way for future generations of Australian women cinematographers.

Ms Walker, is working in London and requested that her degree be accepted by her dear friend and mentor, long-time Technical Stores Officer at AFTRS, John Whitteron, who read some words on Ms Walker’s behalf: “I’m more than excited, humbled and incredibly proud to receive this honorary doctorate and to share this honour with previous honourees, whom I’m proud to count among my friends and colleagues.”

AFTRS Chair Russel Howcroft, said: “An AFTRS honorary degree recognises the exceptional achievements of distinguished individuals, and it is one of the highest honours that can be conferred on a creative screen arts and broadcast practitioner in Australia. Mandy, Glenn and Nerida have each been exemplary leaders in their respective fields as well as inspirational mentors to those to have followed them on a creative path.”