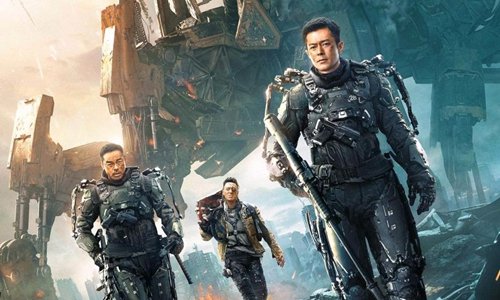 Warriors of Future, the science-fiction action film produced by Hong Kong’s One Cool Group, debuted on Netflix on 2 December 2022 in an epic boost to the international profile of Hong Kong and Asian filmmaking. The Asian blockbuster immediately scored big, standing at number 5 in the FlixPatrol ranking of top Netflix movies yesterday.

Hailed for its soaring vision and superlative production values, Warriors of Future is the highest-grossing Asian film in Hong Kong box office history. Having cost more than US$56 million to make – an unprecedented budget for a Hong Kong movie – with cutting-edge, industry-leading visual effects painstakingly perfected over six years of production, it reaped a total of US$109.8 million following its release in Mainland China and Hong Kong this summer.

Warriors of Future is the brainchild of Hong Kong film legend Louis Koo, a screen veteran of more than 100 local movies since 1994, who launched film production and distribution company One Cool Group in 2013. Starring a respected Hong Kong acting triumvirate of Koo, Sean Lau and Carina Lau, its highly anticipated global release on Netflix headlines the streaming giant’s new slate of Chinese-language content. Koo’s labour of love is one of the finest Asian sci-fi movies to join Netflix’s impressive collection of international film titles, and an English-dubbed version will enable it to reach a wider global audience.

“From an early age and throughout my film career, I have always wondered when we can produce a sci-fi film that is original to Asia,” says Louis Koo, Executive Producer of Warriors of Future and founder of One Cool Group. “I’m proud and thrilled that this has been realised. With Warriors of Future screening on Netflix and reaching beyond Asia to an international audience, it’s a step towards the goal of reactivating the glory years of Hong Kong cinema.”

While lavish CGI productions are invariably huge hits in Asia, Warriors of Future breaks the mould on two fronts – as an Asian-made success story and a futuristic tale. Sci-fi dramas are rarely produced in the region due to the technical challenges and cost of realising their epic scope. An impassioned fan of sci-fi films and collector of robot memorabilia, Koo invested time and resources into the project. In his directing debut, special effects master Ng Yuen-fai of Bodyguard and Assassins and The Storm Warriors fame guided the film from initial cinematography in 2017 through state-of-the-art post-production to its premiere on 15 August 2022 as the 46th Hong Kong International Film Festival opener.

Championing the sci-fi genre in Asia, Warriors of Future is the most visual effects-heavy Hong Kong film to date and provides a computer-generated imagery showcase that Asian filmmakers can be proud of – its heroic save-the-planet scenario unfolds across a circa-2055 cityscape rendered entirely in CGI. One Cool Group’s computer graphics arm, FATface Production, is a leader in the field. Its Asian film work has earned accolades at the Asian Film Awards and the Taiwan-staged Golden Horse Awards. It is also steering the profession into the future through pioneering Artificial Intelligence techniques.

The Netflix airing of Warriors of Future is another milestone in the international footprint of One Cool Group, which in less than 10 years has evolved from a local film production company to a major player in Asia and beyond. Expanding from its Hong Kong headquarters, it has established subsidiaries in Mainland China, Thailand and South Korea and invested in global animation – collaborating with Sony Pictures Animation on Hollywood projects like Vivo and The Mitchells vs. the Machines, and also projects from US independent film producers.

In August 2022, it launched the Warriors of Future NFT through OneCool Collective, a Web3 project in partnership with Hong Kong-based Asian brand tech group Gusto Collective that aims to unlock the limitless potential of the entertainment industry in the digital age. Powered on the Ethereum blockchain, this debut NFT collection provides the spark for a global OneCool community that will empower Entertainment and Movie IPs through Web3 integration.

Reflecting OneCool Collective’s innovative and disruptive digital spirit, this first series of 10,000 unique 3D avatars of futuristic soldiers has a pioneering interchangeable mechanism that allows holders to swap weapons, body armour, arms, helmet and background among the virtual collectibles they possess, with each interchange reflected in real-time in the NFT marketplace. Through these avatars, collectors can also experience combat in the Warriors of Future mobile game.

In the physical world, One Cool Group’s international standing was raised further through the 2022 Oscar nomination of The Mitchells vs. the Machines, which it supported both financially and through its production prowess. Koo served as Executive Producer of the animated sci-fi comedy that also collected multiple gongs at the 49th Annie Awards.

Over the past six years, One Cool Group has been involved in 80 percent of the films released in Hong Kong. In 2020 it produced 10 local features in a bold move to revive a Covid-ravaged film industry and nurture new Hong Kong talent.

A raft of services assures the Group’s status as a leading film enterprise in Asia. Its motto, ‘Thrive through Creativity. Strive for Diversity’, unites a fast-growing team of more than 300 film professionals based at its Hong Kong headquarters and affiliated offices in Mainland China, Thailand and South Korea. Joining its renowned computer graphics division within a diversified portfolio are four post-production companies, including sound and editing, artist management ventures as well as film financing, casting, promotion, distribution and cinematic equipment rental activities.

“My vision for Warriors of Future was to show the world what Hong Kong filmmakers can achieve with first-class CGI and production values,” says Louis Koo. “One Cool Group will continue to push boundaries in technical achievements and Web3 so that the Hong Kong entertainment industry remains an international force in the future.”