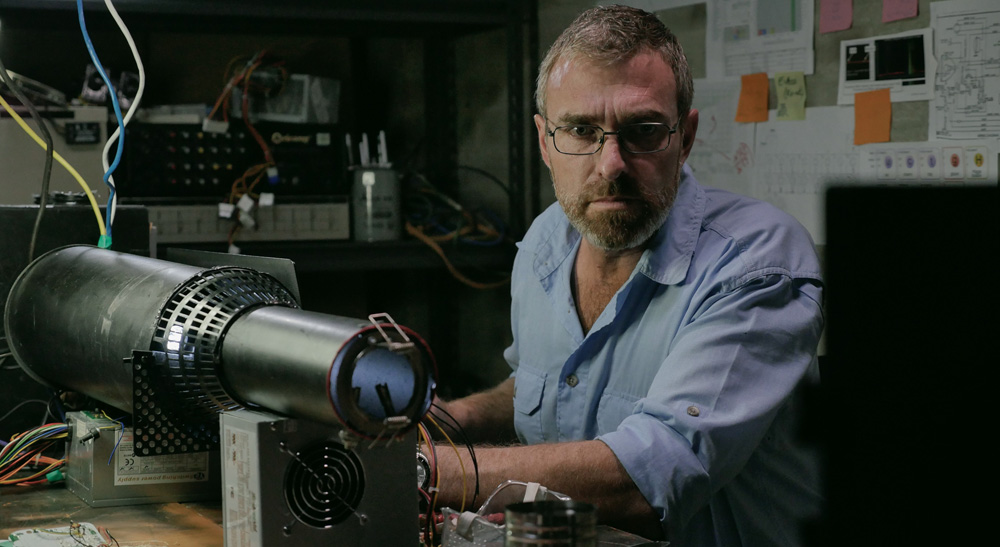 Blackmagic Design has announced the new sci fi film “Quanta” was shot entirely on an URSA Mini Pro, while grading was done using DaVinci Resolve Studio. The film is one of the first globally distributed films by the new Melbourne based film production company and film collective Raygun, and will begin distribution in the United States and other countries in August.

“Quanta,” shot in Melbourne, tells the story of a weary physicist and an egotistical grad student who discover an immense source of information from an unknown signal in space, but face a clash of ideals with how to handle this unprecedented resource. The director on the film, Nathan Dalton, is an Australian filmmaker who has written and directed numerous award winning short films, music videos and corporate videos. Along with filmmakers Samuel Baulch, Jesse O’Brien, Christian D’Alessi, Sasha Dalton, Dalton founded Raygun Films, which has already completed a number of films using various Blackmagic Design products and DaVinci Resolve Studio software.

“Quanta” takes place in Melbourne, and Dalton used the URSA Mini Pro as the exclusive camera for the film. He wanted to capture the intense sense of foreboding coming from discovering a mysterious alien signal, as well as the vibrant life and city of Melbourne.

“For most of the film I wanted to create a sense of dark and moody. Images that made people think there is something out there just beyond sight. We used a lot of low lighting and we tried to bring in a lot of blues and greens with the LUT that we built in Resolve and used with the URSA Mini Pro,” Dalton said. “Also, we had to create high quality sci fi images, but at the same time on a low budget. The URSA Mini Pro let me do that without compromising on image quality.”

The film showed more than just dark and foreboding images. It was important for Dalton and his crew to capture the colour and energy of Melbourne. This meant shooting in crowded venues that showcased a huge amount of different colours.

“There were two distinctly different scenes where the URSA Mini Pro’s color science and dynamic range stood out. In one scene, a main character was in a dark room where a computer signal was being put directly into a characters brain in front a computer. At the other end of the spectrum we shot a scene with 20 to 30 extras in a pub during a trivia night party that had an amazing amount of different colours. The URSA Mini Pro let me capture all the details we needed even in low lighting, while bringing out the warmth of the lighting and skin tones at the trivia night. You just really appreciate the color science in the camera,” he said.

“When we were trying to dial in the look and feel of the film, we used Resolve to create an initial LUT and a finished grade that brought in the subtle blues and greens that we needed to create a sense of foreboding,” he continued. “And beyond that, the workflow between URSA Mini Pro and Resolve could not be simpler. There was no wasted time or money on transcoding because we were able to shoot in RAW and bring the footage right into Resolve.”

Many of Raygun’s other films and projects also use DaVinci Resolve. “Blackmagic Design as a company is a game changer. We are able to affordably shoot and handle post production without compromising on quality. We are creating Hollywood level films, and Blackmagic has been part of what has allowed us to make the jump into starting our own film production company,” Dalton said.