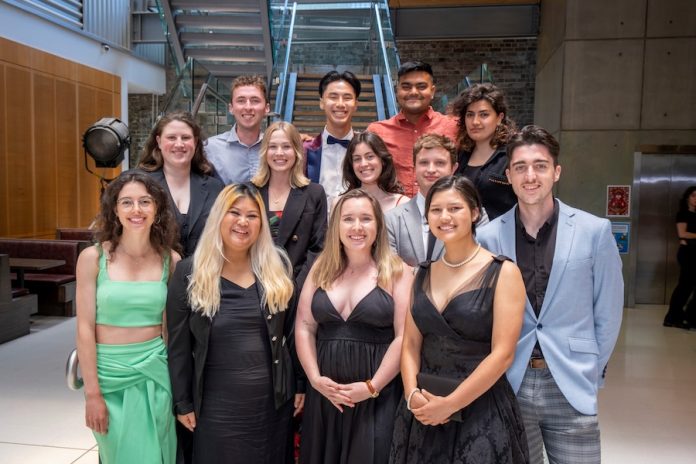 Nell Greenwood, AFTRS CEO, said: “The AFTRS Graduate Program is growing year on year with our generous partners offering real world employment opportunities across an ever-expanding range of roles and disciplines in the production and broadcasting. We know that getting that first step on the ladder is critical to achieving career goals and the good news is that this program works as we have seen more than 90 percent of participants in previous years go on to be offered casual, part and full time employment with either their original host organisation or another company in the sector.”

Jennifer Collins, ABC Acting Director Entertainment and Specialist, said: “The ABC is committed to providing opportunities for new and emerging talent to learn and work with us. It is imperative we support the next generation of creative minds to ensure the longevity and quality of the Australian screen sector. I’m pleased to continue this partnership with AFTRS and look forward to welcoming Holly and Ash to the ABC in 2023.

Deb Spinocchia, Head of Unscripted, BBC Studios Australia and New Zealand said: “BBC Studios ANZ is delighted to take part in the AFTRS Graduate Program. Providing an access point for talented graduates to gain hands on experience and a greater understanding of production is advantageous to the entire television industry. The calibre of student has been impressive and this investment in young talent is essential in nurturing the next generation.”

Endemol Shine Australia CEO, Peter Newman, said: “It’s fantastic to be continuing our support of the AFTRS Graduation Program again in 2022. As a part of our commitment to supporting and developing the next generation of talent in the production sector, we welcome Kumar and Jenna to ESA and look forward to developing their learning further within our business”.

Paul Franklin, CO-CEO, Eureka Productions, said: “We are proud to continue Eureka’s successful partnership with AFTRS having seen Keziah Zen-Aloush, our first intern from the Graduate Program, work across multiple productions this year to become a valued full-time member of the team. The AFTRS Graduate Program embodies our core values as a creative business that nurtures world-class talent, and we look forward to welcoming our second intern, Eloise Woodward, to the Eureka family in 2023.”

EQ Media Group Head of Unscripted, David Alrich, said: “EQ Media is excited to be a part of the AFTRS Internships program – these young interns will eventually become the leaders of tomorrow and giving them a solid grounding in the cut and thrust of scripted and non-scripted development and production will be a key to continuing a strong and robust independent broadcast sector. Congratulations to Alyssa and Mitch we are looking forward to having you join the EQ Media team”

ITV Studios Australia CEO and Managing Director, David Mott said, “As a creative, content driven, company we understand only too well the importance of fostering the new generations of talent coming through the ranks. The AFTRS Graduate Program is so significant in supporting and providing such gateways into the entertainment industry and ITV Studios Australia is honoured to be part of the program once again in 2022. We welcome Liam Shaw , who comes to us with energy, creativity and a passion for content (not to mention some great pitching skills!). We are thrilled to be part of Liam’s journey and will nurture such an opportunity for those starting out in their careers.”

John Godfrey, Head of Commissioning, SBS, said: “SBS is excited to once again be supporting the development of the tremendous emerging talent that exists in our sector through the AFTRS Graduate Program. Alan has already impressed us with his creativity and passion for his work, and we’re thrilled to have him be a part of the SBS commissioning team. At SBS, we’re committed to supporting pathways and progression for the next generation of Australian storytellers and wish all the graduates well in their internships.”

Warner Brothers ITVP Director of Commercial, Production and Operations, Rani Seckold, said: “We are beyond excited to welcome AFTRS graduate Chloe Bobbin to join the team here at Warner Bros. in the capacity of ‘Post Production Assistant’. With Chloe’s current fantastic industry experience and contagious enthusiasm, we hope this position will provide her with the tools and development she is seeking to lead the next generation in our industry. Thank you AFTRS for allowing Warner Bros. to join this incredible journey.”