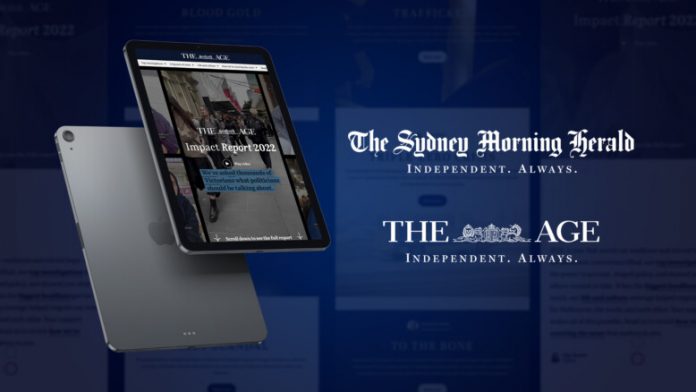 The Sydney Morning Herald and The Age have released their annual Impact Reports, detailing the mastheads’ incredible contribution to the fabric of Australian society through ground-breaking investigations, fearlessly holding the powerful to account and celebrating Australian cities.

Now in its third year, the Impact Report is developed to illustrate the breadth, quality and balance of journalism featured across the two mastheads. They highlight the deep significance journalism has played in keeping Australia a vibrant democracy, told in the words of award-winning reporters who give readers a behind-the-scenes insight into the impact their stories gained.

The reports are an immersive dive into the year’s biggest stories covered by each masthead and show the true impact of subscribers’ support. These include highlighting the results of the Herald’s investigation into the NSW Government’s mismanagement of the Lismore floods response, The Age’s revealing expose into human trafficking, Nick McKenzie’s investigation into Star Entertainment, a year-long investigation into corrupt Chinese state-linked mining in Africa, Victoria’s triple zero system crisis and cowboy-esque practices plaguing the cosmetic surgery industry.

The mastheads’ investigations have held power to account, resulting in real-world change and numerous Walkley Award nominations. The past year has been yet another massive news year, with journalists from the Herald and The Age covering everything from the war in Ukraine, political bloodshed and economic turmoil, to the deaths of Queen Elizabeth II and Shane Warne, climate change and natural disasters.

The Impact Reports also shine a light on the positive lifestyle and culture reporting. As our cities re-awaken after Covid restrictions, the teams from Good Food and Traveller fuelled our desire for travel and food while Good Weekend continued to hold the gold standard in long form journalism.

With a growing portfolio of newsletters and podcast investigations – including the groundbreaking Liar, Liar Melissa Caddick and the Missing Millions by Kate McClymont and 60 Minutes’ Tom Steinfort – 2022 has once again seen the Herald and The Age expand the way they tell stories.

The 2022 Impact Reports are available here.