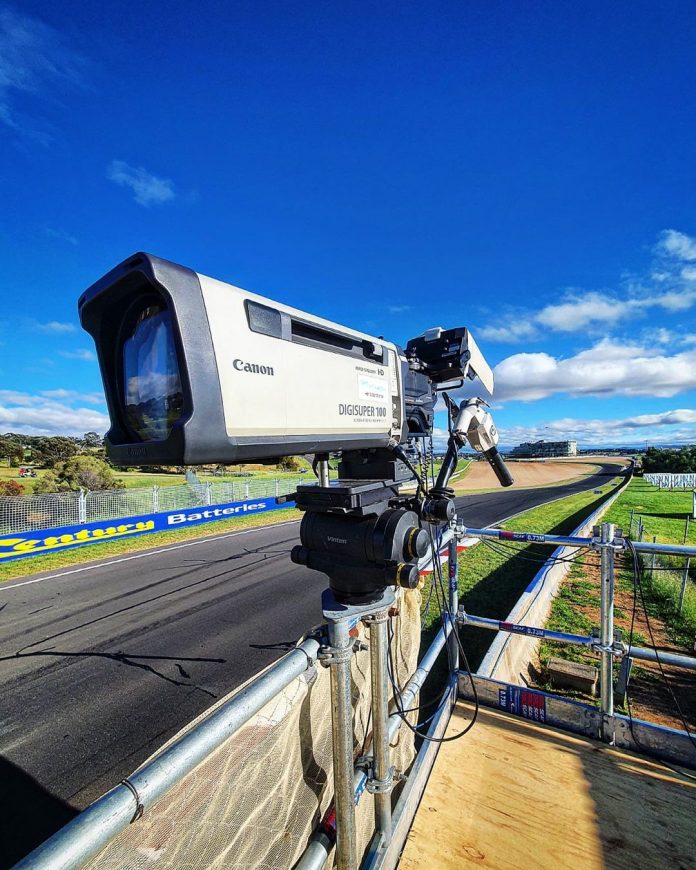 Supercars Media and Gravity Media, the provider of complex live creative production and media services, have released details for one of Australia’s biggest television productions: the all-encompassing coverage of the Repco Bathurst 1000.

Across 199 television cameras on-track, in-car, in the pits, around the track, embedded in concrete kerbs and walls, in the air and across sections of the track on a wire, and accessing four state of the art high definition outside broadcast trucks, 52 kilometres of broadcast cable and a total production crew of 257, Gravity Media and Supercars Media will capture every moment across a total of 2500 minutes of television coverage on Fox Sports and the Seven Network across 6-9 October.

This is the tenth year for Gravity Media’s broadcast facilities and technology collaboration with Supercars Media which produces the global and Australian television coverage of The Great Race.

Gravity Media also has a long partnership with Supercars Media in the television production of each of the rounds in the Repco Supercars Championship, including Gravity Media’s acknowledged speciality and in-car camera technologies.

David Tunnicliffe, Supercars Head of Broadcast, said, “This year we are delivering the biggest production of the Great Race we have ever put together. Nearly 200 cameras will bring to fans every single inch of the racetrack, ensuring viewers are right at the heart of every moment that will decide this year’s King of the Mountain.

“We are also incorporating new initiatives into the broadcast to maximise the insight provided to viewers, like crossing to pit lane during sessions to talk directly to team owners, drivers and team personnel via headset to get their view on the action as it happens.

“Leading into the event, the Bathurst Channel on Fox Sports 503 will be filled with hours of content that will prepare fans of all kinds for Sunday’s Repco Bathurst 1000. We will delve back into history and celebrate Holden’s final Bathurst, the 50th anniversary of Peter Brock’s first Bathurst win, the 30th anniversary of Jim Richards making himself known to the fans on the podium; and every other great moment that makes this the Great Race.”

Ben Madgwick – Director, Media Services and Facilities at Gravity Media, said “Gravity Media is pleased to be the technical partner for all of Supercars broadcast needs, and especially the pinnacle event, the Repco Bathurst 1000.

“This year marks the tenth anniversary of Gravity Media’s convoy heading to Mount Panorama and we look forward to working once again with Supercars Media in delivering one of the world’s great motorsports events to a global audience.

“Supercars is a very important client for all of us at Gravity Media, as their thirst for innovation year in and year out drives our teams to strive to develop and create new ways to immerse our broadcast technology with the racing action. This ongoing desire for innovation and delivery of results cements our reputation as a leading force in specialised broadcast services and facilitation.”

In a nutshell, key production details for television coverage of the Repco Bathurst 1000:

In addition, Gravity Media also provides the technology and systems for Supercars’ team radios, and isolated cameras providing constant coverage for the Gravity Review System, used by the motorsports judiciary and race control in the management of the Bathurst 1000. Gravity Media also provides all technology and facilities for the production of on-track big screen coverage.