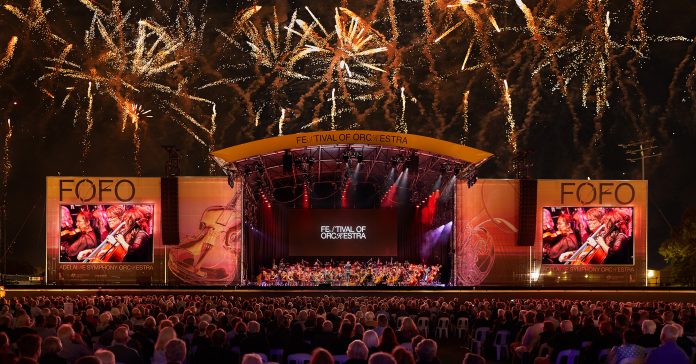 An exciting new initiative and a first for Australia, the renowned Adelaide Symphony Orchestra (ASO) recently transported the performance out of the concert hall and into the outdoors to present the Festival of Orchestra (FOFO), a six-concert series celebrating an eclectic mix of musical genres. Supported by the Australian government’s RISE Fund and technical partner, Novatech Creative Event Technology, the event was staged at the Adelaide Showground, with the stage for the 5000-capacity central arena fitted with three large LED screens in different configurations throughout the six concerts. Brompton Technology’s industry-leading LED processing was deployed throughout, giving an overwhelming sense of visual grandeur to the stunning music performances.

Established in 1936, ASO is South Australia’s largest performing arts organisation, with a membership of 75 world-class musicians, renowned for a diverse and versatile repertoire. The aim of the new festival series was to bring the world of orchestral music to a broader audience, opening with a traditional Classical concert, followed by the Ministry of Sound Classical, the epic Carmina Burana with massed choirs, highlights from Broadway musicals, a rock band fusion with The Angels, and culminating with the BBC’s extraordinary Blue Planet II comprising a score by Hans Zimmer and a special guest narrator.

To complement the musical programme, ROE Visual Carbon CB5 panels were selected for their exceptional brightness and low weight, with the central LED screen used as a visualization tool displaying a mystical ensemble of otherworldly shapes that pulsated with the music, as well as pre-recorded video footage and holding images. The remarkable centre display was flanked with two IMAG side screens. Novatech deployed two 4K Tessera SX40 LED processor and four Tessera XD 10G data distribution units for the main screens, along with a Tessera S4 LED processor for an additional surtitle screen for one performance, bringing bullet-proof reliability to the video setup.

“Brompton is an industry leader and simply gives incredible results for the LED screens. The Tessera software and interface is so easy to use in a show environment, with its live canvas making complex multi-screen setups extremely easy to coordinate and align,” comments Ashley Gabriel, Director of Sales & Marketing at Novatech. “This proved incredibly helpful as we had different sections of input going to different screens on every performance.”

The technical delivery was a collaboration between the ASO production team, Novatech and event rigging specialists, Nexstage. Production designer Jayden Sutherland from The Bakery Design Co., was appointed by the ASO to oversee all stage, lighting and video aspects of the event. Novatech also supplied all equipment for the technical production of the event, including rigging, audio, lighting, video and comms.

“Novatech has been working with the ASO for over a decade, and in a formal partnership for the past six years. We understand their production values and standards, and their commitment to presenting a high-quality product for their diverse audience. It was only natural that we would get involved in their inaugural FOFO concert series,” says Gabriel. “Brompton reliability is absolutely key. We always know when using Brompton processing that we will have trouble-free setup over complex screen layouts, unbeatable reliability, and can meet the most stringent visual requirements.”

“Festival of Orchestra is possibly ASO’s largest ever undertaking. Having worked with Novatech for over a decade, they really understand our business,” says Vince Ciccarello, Managing Director of Adelaide Symphony Orchestra. “Orchestras are unique beasts which have very special needs, Novatech has been brilliant at understanding those and delivering on them. It’s hard to imagine how we would’ve delivered this project without a local partner like Novatech on the ground. The fact that Novatech is local means that they not only know this venue and site, they’ve been able to do recces at short notice, they’ve been able to plan, meet, get onto issues as they arise, and be out on site on a regular basis with the attention to detail that has been critical for such a big undertaking.”

As the festival was held in early summer, the weather threw everything at the production, from cold and windy nights through rain to steamy and hot conditions, “but at all times the Brompton processors performed flawlessly, and the series was a resounding success.” Gabriel concludes.