“Christmas Down Under” Produced with Blackmagic 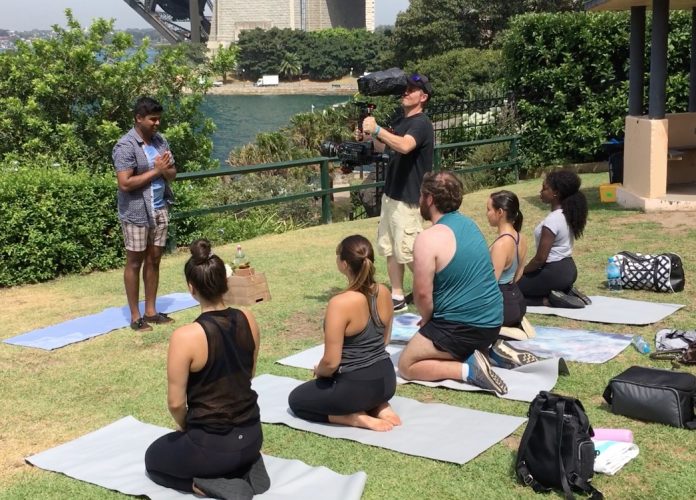 The film, which is being distributed by Ion Network’s in the United States and by Level 33 globally, was directed by My Big Fat Greek Wedding’s Louis Mandylor and produced by Adam Horner of Ignite Pictures. It follows a tightly wound American, Ellie, who flies to Australia and enlists the help of an aboriginal tour guide and YouTube famous Uber driver to find her husband and his eclectic family.

Christmas Down Under, a full length feature, was shot in 20 locations in Australia over three weeks and required incredibly efficient filmmaking. Also, because the film is being shown in a crowded market of holiday films, speed and efficiency had to come with high quality.

“The holiday film industry is incredibly competitive, and more so now than ever. We’re now seeing almost every major network producing numerous holiday movies per year. So, quality matters and that was the reason we chose to use the URSA Mini Pro 4.6K G2 and DaVinci Resolve,” said lead producer Adam Horner.

Maarten ‘Fish’ Talbot from Tazmania’s South Sky Pictures, 2nd Unit DP and a camera operator on the film, as well as an co-producer and editor, explained: “Getting an overall unique and culturally appropriate look for the film meant leaning into those differences while still having a Christmas feel. The Blackmagic cameras really handled the harsh Australian sun and Resolve let us pick a colour pallet in post that set us apart from the typical Christmas movie.”

The film was shot by DP Luke Walker using three URSA Mini Pro 4.6K G2s, with some of the scenes shot with all three simultaneously. To ensure that the tight deadline was met, Walker relied on the camera’s ease of use and ability to be set up and broken down quickly.

“For the simultaneous shots, the camera’s ease of use meant all camera operators were on the same page at all times. No other camera produces a look like the URSA Mini. With standard features like false colour, being able to use different codecs, built in NDs and more, we found we had everything we needed,” Walker continued.

Post production, which was done at South Sky Pictures in Tazmania, took place in the middle of strict Covid quarantine rules in Australia. Editing and VFX were done by Talbot and post production manager Joshua Freeman, both using DaVinci Resolve Studio.

South Sky Pictures picked up the post production work for the film after an initial cut had been done in other software.

“We had to rebuild the entire project in Resolve, which actually helped make post quicker and more efficient since there were no stability issues and we could begin to edit without having to nurse our tech,” Talbot continued. “Adapting to Resolve was a surprisingly intuitive process because it could quickly ensure the editing process was streamlined, and we found we could instinctively cut much faster on it.”

He continued: “Resolve’s simple approach when it comes to user experience is great. You have to remember that this film was posted by two guys on having to work at home during the pandemic, so the way Resolve splits different aspects of post production into tabs meant we could have everything we needed in front of us without wasting valuable screen real estate or becoming fatigued by searching through the interface.”

Adam Horner, the film’s Producer said, “These additional scenes were shot at the peak of Australia’s pandemic crisis, with most of our talent and crew unable to get together. The shoots had to be designed and shot in a way that made everyone appear as though they are in the same location, despite the fact that they were thousands of kilometres apart. Using Resolve and Blackmagic cameras meant the new scenes were cut and coloured just days after receiving all the media.”