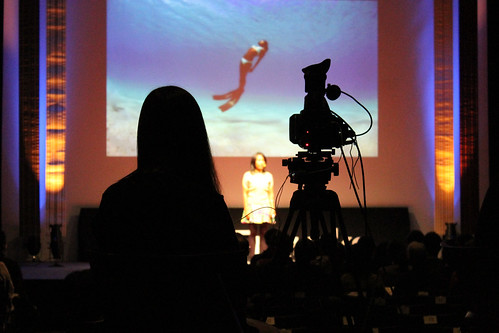 Blackmagic Design has announced that Blackmagic products, including Blackmagic Studio Camera 4K and ATEM 1 M/E Production Studio 4K, were used for the live streaming and recording of seminars held at the recent TEDxFUKUOKA 2015 event in Japan. TEDxFUKUOKA is part of the worldwide set of TEDx conferences. TEDx is a program of local, self organized events and has become one of the most successful sets of events worldwide. Started in 2012, TEDxFUKUOKA is run by volunteers and brings together people from all over Japan. As part of the program, TEDxFUKUOKA live streams their events and publishes the recorded footage of the events on YouTube to share those ideas with viewers.

“When we started TEDx we often needed to switch visual images from a computer which is fed to a projector, so we were looking for a switcher that can connect to VGA or HDMI, not just HD-SDI. There are not many switchers like this, and are usually very expensive. Then we found ATEM Television Studio, and we started building our system around ATEM switchers,” said Takeo Noda, who looks after the technical side of TEDxFUKUOKA and is one of the event’s many volunteers.

Around the stage where guest speakers present, four Studio Camera 4Ks were installed. Each camera’s output was recorded by a HyperDeck Shuttle, with its loop output sent to the ATEM 1 M/E Production Studio 4K. The program output from the switcher was recorded using HyperDeck Studio Pro, sent to an UltraStudio Express for capturing and then streamed via Livestream. Also, video clips and Keynote were output from different computers, sent to an ATEM Television Studio, which output the media to the event’s main projector.

“I used the ATEM 1 M/E Broadcast Panel for switching the recording and streaming, as it required more accurate switching. On the other hand, I did not need such precise switching for the screens in the presentation area so I used the ATEM software control,” said Noda.

Noda spoke about SmartView 4K and Audio Monitors which he used for monitoring: “I could visually confirm the output, so if there were any glitches I would notice it right away, which is a great advantage. We did not have enough devices or interfaces for monitoring before, so it caused delays in fixing any problems or we would realize the problem only after the event. With SmartViews and Audio Monitors, we could improve the efficiency and quality of our event.”