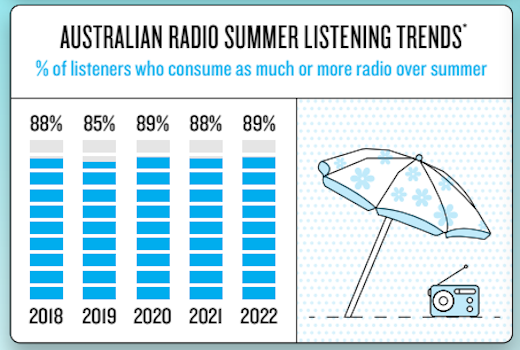 Nearly nine in 10 radio listeners consumed as much or more radio over summer as they do during the rest of the year, as surging Omicron outbreaks disrupted holiday and travel plans, according to the fifth annual GfK Summer Listening report released recently.

The study found 91 percent of listeners consider radio a great source of information over summer, and while many were forced to spend time in isolation due to COVID, 66 percent listened to radio to feel connected.

“Radio is synonymous with an Aussie summer, and while this was a particularly challenging summer for many people, they stayed connected to their communities through radio,” said Joan Warner, chief executive officer of industry body Commercial Radio Australia.

The research showed radio consumption has remained at high levels across the past five seasons the research has been conducted.

“The summer listening trend has proven to be consistent both pre- and post-COVID, through emergencies such as floods and bushfires, and whether people are at home or away from home,” Ms Warner said.

Despite the impact of COVID on movement and spending this year, 89 percent of radio listeners said radio kept them informed when out and about and 65 percent said they listened to radio at their holiday destination.

An interesting trend to emerge this year was the increase in radio listening among younger listeners across different locations and on different devices.

The under-25s were also more likely to listen with other people and believe radio enhances time spent with family and friends. One in three (35 percent) said they had discussed what they heard on radio with others.

In a sign of the continuing growth in digital listening, 40 percent of this age group used a smartphone to listen over summer, compared to 57 percent who listened on an AM/FM radio.

Listeners in regional Australia particularly value radio for news and information. More than one in two regional listeners said they listen to radio for breaking news, while 76 percent rely on radio in emergency situations such as adverse weather events, and 66 percent said radio is the place they turn to for updates on local news and events.