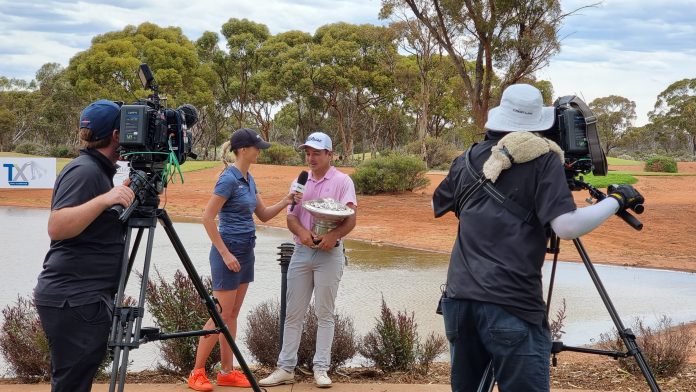 Gravity Media, the provider of live creative production and media services, and sports production company JAMTV have detailed an expanding partnership to produce television coverage of the ISPS Handa PGA Tour of Australasia.

This is the fourth season for Gravity Media’s broadcast facilities collaboration with JAMTV which produces the PGA Tour television coverage across Kayo and FOX Sports in Australia and in New Zealand. Gravity Media’s collaboration with JAMTV on the production of the Australian PGA Championship in November will be broadcast on FOX Sports, Kayo, Nine and 9Now.

Gravity Media’s cameras, satellite and uplink facilities, and crews are working closely with JAMTV’s production team as they cover 14 tournaments during this PGA Tour of Australasia season.

Gravity Media, in conjunction with JAMTV, has developed new broadcast innovations for the coverage including highly mobile cellular broadcast cameras and cloud-based technology linking to the Gravity Media Production Centre in Melbourne to streamline and enhance JAMTV’s production of the PGA. Gravity Media will deliver coverage from 14 venues around Australia over this season. It is a significant technological and logistical exercise that builds on Gravity Media’s successful golf broadcast facilities provision to JAMTV over the past four years.

According to Cos Cardone,CEO of JAMTV, “Gravity Media has been a great partner as we have grown the golf footprint in this country and will continue to work to innovate golf production to the highest international standards. By its very nature, golf is one of the most complex sports to produce and our partnership over the past four years has enabled us to offer our partners at the PGA of Australia a sustainable broadcast model.”

“We are delighted to once again partner with JAMTV,” added Marcus Doherty, Account Executive – Media Services and Facilities at Gravity Media Australia. “We have seen enormous growth in the JAMTV’s PGATV portfolio over the past three years.

“We are working closely with JAMTV on delivering new innovations in the production of golf in Australia, including new cloud-based technologies and production through Gravity Media’s Melbourne Production Centre which will streamline JAMTV’s already impressive production standards. As part of our golf production and technology partnership with JAMTV, we are also looking forward to the Australian PGA Championship in late November and the launch of new camera technologies and “Trackman” ball tracking technology.”

In addition to its partnership with JAMTV on the PGA Tour of Australasia, Gravity Media has an ongoing collaboration with JAMTV to produce television coverage of the 2022 AFLW season for Fox Footy and Kayo.