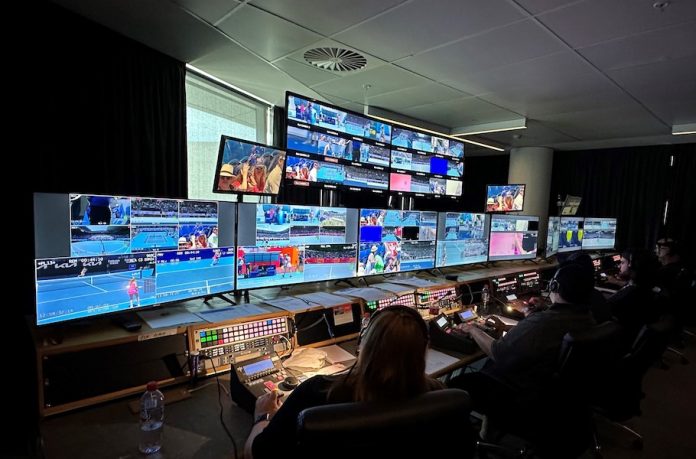 Gravity Media and Tennis Australia have detailed the expanding broadcast and technology partnership that delivers the Australian and international all-screens coverage of this year’s Australian Open.

This is Gravity Media’s 9th year as the broadcast and technology solutions partner for Tennis Australia for the Australian Open in Melbourne, and its 19th year as the host broadcast technical provider for the entire event.

Building on this year’s agreement, Gravity Media has also worked in partnership with Tennis Australia to deliver the global coverage of the United Cup played in Brisbane, Perth and Sydney in the lead-up to The Australian Open. As part of the revamped Summer of Tennis, Gravity Media also provided the broadcast and technology solutions for coverage of this year’s Adelaide International.

Kevin Moorhouse, Advisor, Gravity Media said, “In 2005 we provided our first total technical facility solution for the host broadcast of the Australian Open.

“Our role and the requirements for Tennis Australia have evolved dramatically over the past 19 years and this year’s event is the biggest and most complex operation we have undertaken.

“We are creating and managing 1080i, 1080P and ultra high definition coverage across multiple courts and the entire precinct, and ensuring the delivery of these multiple signals to the host broadcast along with unilateral feed requirements for Tennis Australia’s broadcast partners.

“It is a complex procedure and undertaking. It is a testament to our crew on this job, all of whom are extremely talented and hardworking, that once again Gravity Media is able to deliver such a high quality and stable solution for our client Tennis Australia. I thank our crew. I also thank Tennis Australia for once again entrusting us with the delivery of the broadcast and technology undertakings for the Australian Open.”

To achieve system connectivity, Gravity Media is using an IP-based large ‘fly away’ system with a level of base band systems to provide a system that is effectively a 3900 x 3500 video router. An integrated audio solution between Audio Live and Calrec cores deliver the ability to route over 2500 audio signals within the facility.

All slo-motion replays plus archiving and media management is achieved using 25 x EVS servers, 52 x EVS IPDs, 16 x XT Access, 3 x X Files plus 4 x DB Servers. During any day’s play, Gravity Media is delivering 25 to 45 streams to the 900 Tb of storage on site which allows all the action to be accessed by the host and unilateral broadcasters.

Gravity Media and the Summer of Tennis

In the lead up to The Australian Open, Gravity Media supported Tennis Australia in providing facilities for the United Cup mixed teams tournament in its inaugural year, as well as the Adelaide International.

The United Cup – held in Brisbane, Perth and Sydney – saw Gravity Media provide in each city outside broadcast production trucks and facilities accessing 28 cameras and multiple EVS replay and edit suit facilities, along with the Xeebra replay system for use by teams and players in the United Cup.

Across the event, additional bespoke Gravity Media “fly away” production systems were implemented in Sydney to draw together coverage from multiple cities to create a completely integrated and produced “world feed” for delivery across multiple broadcast and subscription platforms in international markets.

The Adelaide International accessed one of Gravity Media’s state-of-the-art high definition production trucks and the company’s specialised “fly away” production solutions coupled with 27 cameras across multiple courts to deliver bespoke coverage feeds for Tennis Australia and its domestic and international broadcast partners.

Gravity Media’s partnership with Tennis Australia in delivering the broadcast and technology solutions for the Australian Open and Summer of Tennis builds on Gravity Media’s acknowledged broadcast technology and production partnerships across major sports in Australia, including the Melbourne Cup and all major horse racing events in Australia, the Tour Down Under, the PGA Tour of Australasia, the Supercars Championship including the Bathurst 1000, the FINA World Swimming Championships (25m) in Melbourne, the Sydney Hobart Yacht Race, the FIM World Supercross Championship, along with a partnership with Cricket Australia for the coverage of multiple competitions in Australia, and the rapidly expanding and developing AFLW.