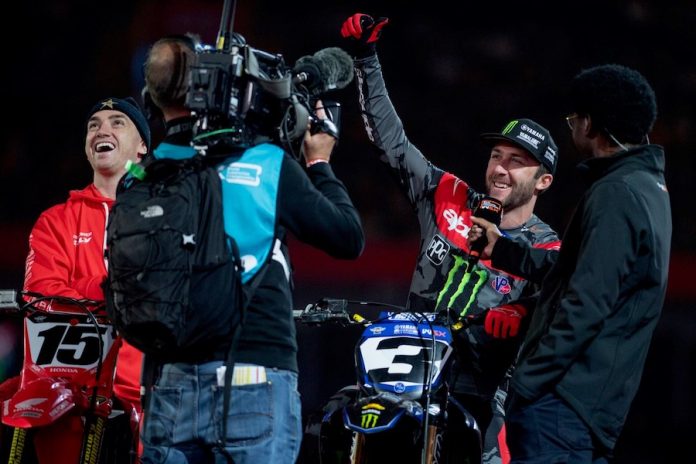 As part of the partnership, SX Global and Gravity Media are accessing new rider helmet cameras designed and developed by Gravity Media Australia.

The new cameras are part of a 16 on-bike camera commitment to the coverage and make their debut on Australian soil with Gravity Media’s all-screens production of the first WSX Australian Grand Prix at Marvel Stadium in Melbourne this weekend, October 21-22. In total, Gravity Media will provide a 33 camera coverage, including speciality cameras and a ‘SpiderCam’ tracking the action from above.

Gravity Media Australia and SX Global will deliver this coverage of the World Supercross Championship Australian Grand Prix across major international broadcast platforms, including the Seven Network in Australia, FOX Sports in the United States, DAZN covering Europe, India and Japan, and BT Sport in the United Kingdom.

WSX – the FIM World Supercross Championship – is the supercharged combination of live action motorsport and an elevated level of adjacent entertainment, including live music, pyrotechnics, freestyle motocross shows and more. Marvel Stadium will be transformed into the ultimate dirt battlefield for one epic night of unmissable action and intense competition racing involving 10 teams and 40 of the best riders from across the globe.

“Through these innovations, Supercross fans will be riding with the superstars of the sport like never before. Our team will be bringing fans unprecedented levels of production and ways to view Supercross.

“The WSX Championship will break new grounds for broadcast coverage of Supercross, expanding the awareness and appreciation of these incredible athletes and their abilities, as they risk it all to become World Champion. SX Global must work only with the best to achieve the world-class standards we expect, which is why we have partnered with Gravity Media.”

In a short period of time, the SX Global team has been able to build the business model, the team, which includes broadcast director Nathan Prendergast, and stage the opening event at Principality Stadium in Cardiff, Wales two weeks ago. The World Supercross Australian Grand Prix in Melbourne is the next round in the Championship’s pilot season. The Championship will expand significantly across major territories over the coming eighteen months and Gravity Media has been appointed by SX Global to deliver cutting edge broadcast technology and production services across each round of this rapidly developing Championship.

Ben Madgwick, Director Media Services and Facilities at Gravity Media: “Gravity Media is proud to partner with SX Global on the World Supercross Championship and the WSX Australian Grand Prix. Gravity Media will be delivering a diverse suite of services with conventional broadcast, immersive POV cameras, live onboard cameras – plus SpiderCam – to capture the action from all possible angles. We are delighted to be the preferred technical partner for SX Global and ensuring all action on the track, plus the behind-the-scenes stories, are captured for production to share this exciting sport with a global audience.”