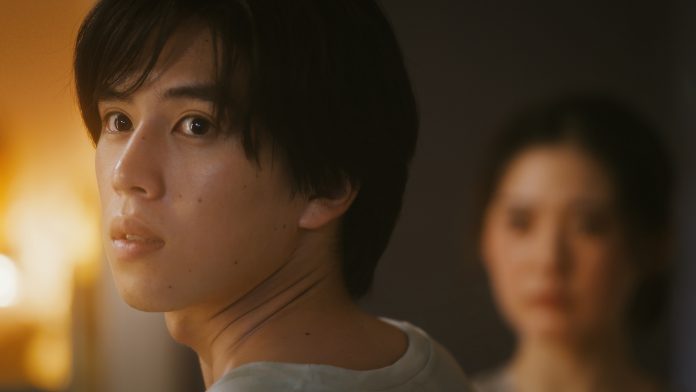 “Dry Flower” is a dramatisation of the world of two big hit songs, “Dry Flower” and “Kakurenbo (Hide and Seek),” by singer songwriter Yuuri. “Kakurenbo” is a song about a heartbroken man’s sad feelings for his lover who suddenly left him without saying a word, and “Dry Flower” is the after story of the song, sung from the perspective of his girlfriend. Both songs surpassed 100 million streams via music subscription services at an exceptionally fast pace and became a hot topic in Japan.

“I aimed to give the piece a cinematic look. I used a lot of nodes and shapes to create lighting effects according to the position of the light source in the shots. I also changed the grading style to convey the emotions of the characters since the mood of the same scene can change from episode to episode,” Kuro said.

Kuro continued: “In the happy scenes, I made brighter, slightly washed out looks and didn’t use vignette at all. But there are some flowers in some shots, which play an important role in the film, and I increased the saturation to enhance the colours. On the other hand, in the sad scenes, I made the shots more contrasty and darkened the surroundings with the vignette effect. Also, in the scene where the two are arguing, I made the overall colours stronger and contrasty to express their tension.”

Many of the scenes in the series were shot in the same situation. However in episode 2, which depicts the boyfriend’s perspective, the colour is a noticeably softer tone as he does not notice the change in his girlfriend’s feelings. Episode 3 has a darker and higher contrast tone to show the pessimistic feelings of the girl, who is not feeling the same way as her lover.

“Since each episode has different mood, I applied different grading styles to the same scenes in different episodes. For example, in a scene in a bedroom, I enhanced the highlights from the window and created a washed out look for episode 2. But in the same scene in episode 3, I made the whole scene darker, increased the contrast and added green in the shadow area to make a colder look. I aimed to make the audience feel the couple’s emotion by color.”

Kuro continued: “There is a shot where a woman cries in a dark room. It was noisy in original footage so I removed the noise using the Noise Reduction tool. Also, flowers in the shot were vivid in colour originally, but here I’ve reduced the saturation to imply their fading relationship.

The series was graded in DaVinci Resolve 17. Chang spoke about the new features in DaVinci Resolve 17: “I really like the new HDR grading and Color Warper. The HDR grading allows me to control in more fine tuned ways than the regular Primary Color Wheels, so I used it to balance all shots. After I balanced the shots with HDR grading to the shadows and highlights, and then used the Primary controls for stylisation. The Primary also affects colour in the mid tones, so it’s faster and easier to use if I want to add colors all over the shots.”

“The Color Warper is very useful for adjusting color details. I used to use the Qualifier and the Curves, but the Color Warper allows me to adjust colors faster than those tools. I had to grade this series in a busy schedule, but these new features helped me work more efficiently,” Kuro concluded.