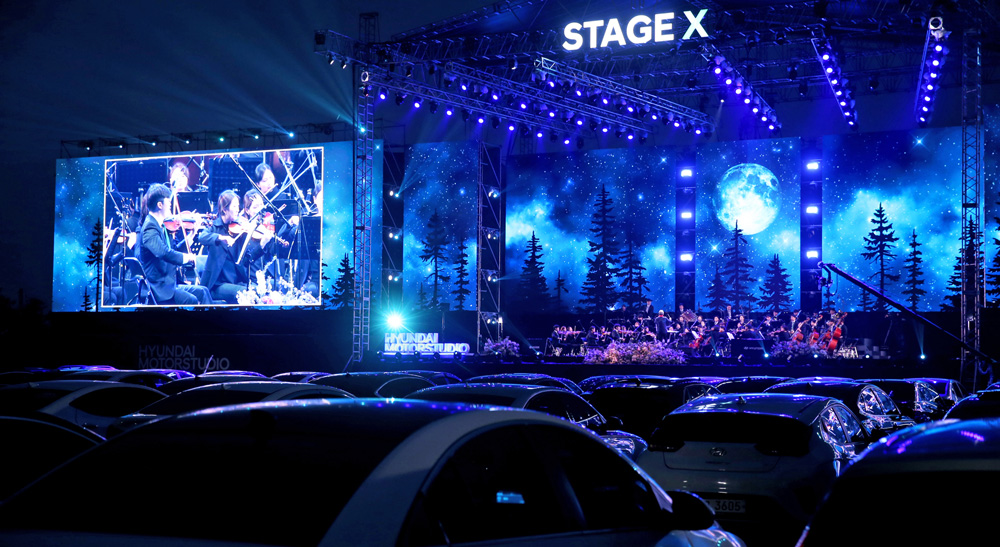 Blackmagic Design has announced that the recent Hyundai Stage X Drive In Concert used ATEM 2 M/E Production Studio 4K to provide live production switching for the unique concert experience. AV for the 3 day concert was provided by Korea’s GRAMPUS Inc., who also used Blackmagic Design’s HyperDeck Studio for recording the event held in front of more than a 1000 people sitting in their cars and enjoying a live concert, while still maintaining safe social distancing.

GRAMPUS is a Korean based AV company founded in 2013 that focuses on live production of artist concerts, promotion video productions and other live events. After providing services for the 2019 Stage X Concert, they were asked to determine how to provide AV for the 2020 concert series that would give the audience the feeling of being at a regular concert even though they were all required to stay within their cars.

The concert is an annual event hosted by Hyundai Motorstudio and is held over three days, with this year’s first day including KPop and indie musical acts such as Tae Woo Kim, Ailee, Se So Neon, Moon Band and Sultan of the Disco on the first night. This was followed the next two nights by the Korean cast of the Broadway musical 42nd Street and Nanse Gum leading the New World Philharmonic Orchestra. All of this happened at a time when most live performances around the globe were cancelled.

Held at the outside parking lot of the KINTEX Convention Center on the outskirts of Seoul for 2 hours each night, concert goers received audio directly to their car’s radio, while watching the acts live on stage and on a number of 20m x 8m screens. ATEM 2 M/E Production Studio 4Ks were used to switch live streams coming from seven cameras located around the stage and parking lot, as well as for graphics insertions and effects.

“The concept was for an ‘untact’ concert where social distancing was kept but with the concert experience was just as amazing as before,” said Mr. Jin, Jong Woo, Head of Department, GRAMPUS. “The audience got to hear the music from a certain radio frequency and they reacted by honking and turning on their hazard lights. So, we had to pay special attention to getting good shots of this unique scene with the cameras from several towers and combined it with shots from the stage.”

“We used the ATEM switcher to send out different PGMs to LED screens during each show. We’ve been using the ATEM 2 M/E for other artist concerts in the past, and its features such as SuperSource, and its compact size, were perfect for handling a multi camera event held in a space that was built for parking cars and not for good AV logistics,” he continued.

“We have been doing various styles of live productions for years with Blackmagic Design gear, so even with the strange venue we knew we could get the job done. Blackmagic Design products provide the best value, are highly efficient, compact and portable, and which best fit our workflow,” he said.