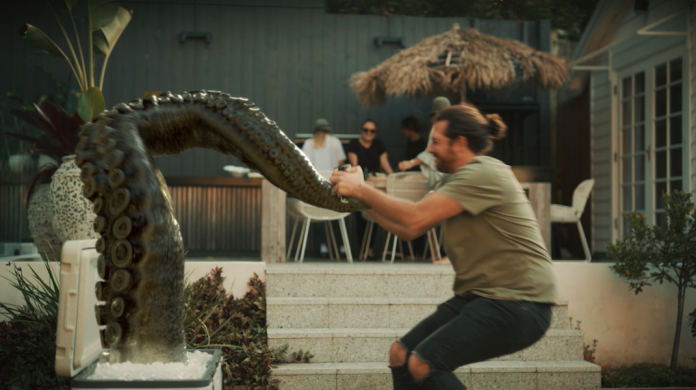 Independent full-service agency Awaken has created a TV campaign for beverage company Kraken’s new Black Mojito can, tapping into the brand’s iconic ‘Kraken Beast’ and bringing it to life to launch the premix cocktail.

Awaken was briefed by Kraken parent company Proximo Australia to bring its iconic Kraken identity, ‘The Beast’, to life using the mysterious creature to showcase the new Black Mojito premix cocktail in a can as a social and refreshing drink for dark rum lovers, and a convenient extension of the Kraken brand.

The TVC opens on a regular guy at a backyard BBQ, heading over to the esky to grab a drink, when it is mysteriously sucked under the ice. Suddenly, out shoots The Beast’s tentacle, holding a can of Kraken Black Mojito – which the man is instantly drawn to. A tussle between the Kraken tentacle and the man ensues, before The Beast relents and lets go of the can as the man falls backwards.

Once recomposed, the man sips the Black Mojito can and shares the drink with his friends. The final scene is the Kraken Beast slamming down a pack of the premix cans onto the beach in the foreground as the voice-over says: “The new Kraken Black Mojito – Fiercely Refreshing.”

Awaken founder and CEO, Chris Parker, said: “Kraken is well known for its unconventional positioning, so we really wanted to play into that. The objective of this campaign for Awaken was to communicate the refreshment, social associations, and great taste of the Kraken Black Mojito, sparking intrigue with dark spirit drinkers.

“We’re absolutely thrilled with the outcome. We’ve really captured Kraken’s witty nature and the mystery built up around the Kraken Beast, using sound effects, music, and some added CGI to help solidify the enigma and edgy nature of the brand.”