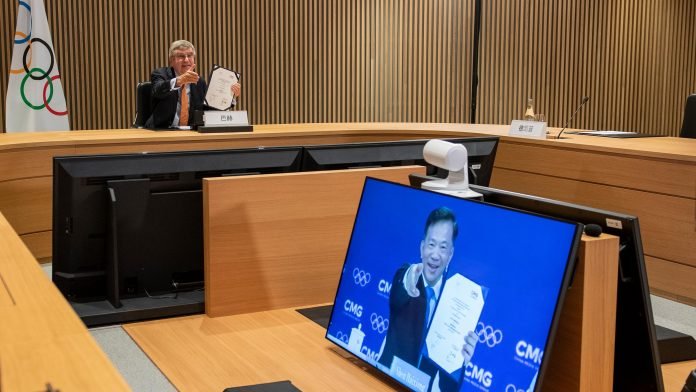 The International Olympic Committee (IOC) has announced that the China Media Group (CMG) has been awarded the exclusive broadcast rights in the Chinese mainland and Macau (SAR) for the XXV Olympic Winter Games in Milano Cortina in 2026, the Games of the XXXIV Olympiad in Los Angeles in 2028, the XXVI Olympic Winter Games in 2030, and the Games of the XXXV Olympiad in Brisbane in 2032.

CMG has acquired the rights across all broadcast platforms, including free-to-air television, subscription television, internet and mobile. The agreement also includes the right to broadcast all editions of the Youth Olympic Games until 2032.

The new agreement was signed during a virtual ceremony between IOC President Thomas Bach and CMG President Shen Haixiong.

“The IOC is delighted to announce an extension to our agreement with our longstanding broadcast partner, CMG” said IOC President Thomas Bach. “The new agreement means Chinese sports fans will be able to continue enjoying CMG’s first-class coverage of the Olympic Games through to 2032. I would like to congratulate CMG for the overwhelming success of its coverage of the Olympic Games Tokyo 2020, when it reached hundreds of millions of people.”

The IOC redistributes over 90 per cent of all its revenues to support athletes and sports organisations around the world.