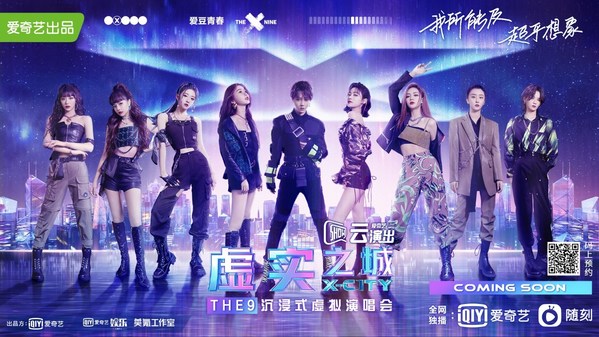 XR technology will be used throughout the whole process of the live-streamed concert, rendering an immersive virtual stage performance. The quality of the scenes will be further enhanced by augmented reality (AR)-enabled virtual front scenes, the use of multiple XR virtual machine positions, and film and television-grade equipment.

Meanwhile, viewers will have the freedom to enjoy the performance in their own unique way by switching among multiple different camera angles. The theme of THE9’s concert is a tailor-made virtual city enabled by XR technology. The stylised, realistic XR technology will feature online virtual seats, exclusive virtual images, real-time interaction, on-site physical light sticks, and a fans-created stage, bringing fans closer to the stars in an immersive environment.

To support the roll-out of Cloud Show and other products, iQIYI has been establishing new technology infrastructure. At the end of 2020, the Company unveiled the iQIYI Virtual Production Base in DaChang, the first of its kind in China. At the Base, cutting-edge technologies such as AI, visualisation, performance capturing, real-time synthesis, LED screens, and lighting, are being harnessed to deliver solutions that span the whole production chain, laying a solid foundation for Cloud Show.

In addition, iQIYI has launched a new cloud ticketing system featuring customized services spanning pre-sale, performance, and after-sale. Besides functions like ticket purchasing and give-aways, the audience can also use the platform to purchase merchandise such as props, peripherals, and images, offering users a one-stop and individualized experience. The system has been designed with customer experience at its center, enabling special online ticketing services such as automated ticketing, checking-in, and ticket stubs with tailor-made colours, mirroring the real experiences users will encounter at brick-and-mortar theatres.