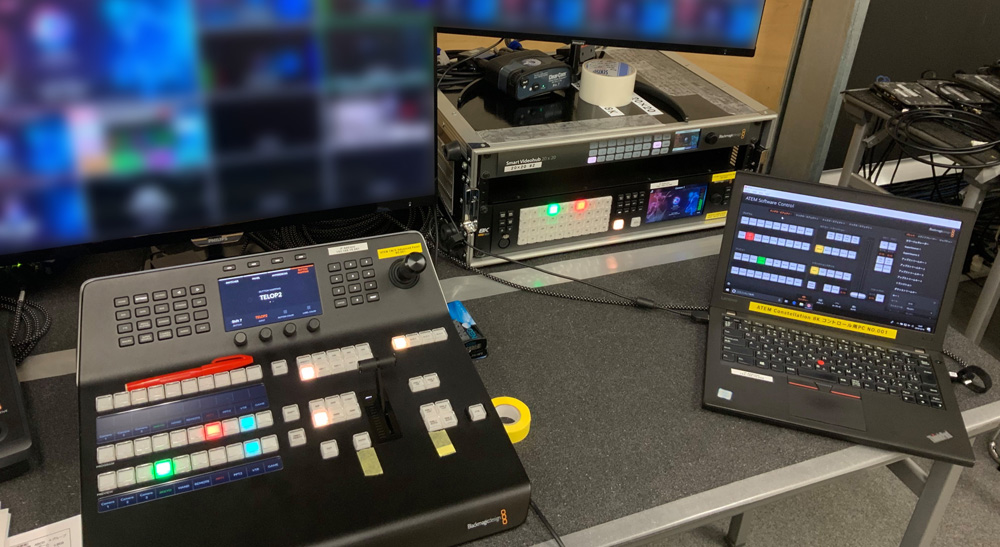 Kotaro Abe, CEO of Cyber Media TV said: “I have already used an ATEM 4M/E Broadcast Studio which was stable and worked great. However, I always wanted more inputs, so I decided to purchase the ATEM Constellation 8K when I heard about the announcement as it had so many inputs and two SuperSources.”

He continued: “In Japan, the style of esports streaming is different than those of overseas. We tend to use so many picture in pictures, so having two SuperSources has great advantage. It also has four DSKs which means I can use more keys and fills.”

For more efficient operation, Cyber Media TV heavily used ATEM’s macro feature. “I, for example, use the macro to playout some video combining HyperDeck Studio Minis and the ATEM. The ATEM can communicate with up to four HyperDecks and recall transition through the macro. As the ATEM has two SuperSources, I can use one SuperSource while writing macro for another SuperSource for different effects and switches. During eSports streaming, it is very hectic so I make macros for all complicated operations so that all I have to do is press one button, and the video starts to play and overlay the subtitles. “

“I cannot work without the ATEM’s macro function for eSports streaming. I use ATEM’s physical control panel for quicker operation. Sometimes I rent an ATEM 2M/E Broadcast Panel for bigger scale jobs but usually I use an ATEM 1 M/E Advanced Panel with macro function,” he said.

In September of 2019, Cyber Media TV handled streaming at the Tokyo Game Show, one of three biggest video game shows in the world. For the event, they used Teranex Mini converters, UltraStudio Mini for game capture and HyperDeck Studio Mini for VTR play out, as well as the ATEM Constellation 8K and ATEM 1 M/E Advanced Panel.

“The ATEM is very stable, even though it is used in rough situations that other manufacturer’s switchers would have stopped working. I have used it for three days with the power on all the time and have never had a single problem. In fact, I have seen other streaming companies using ATEM Constellation 8K for eSports too,” Abe said.

“Beyond eSports, we sometimes use the ATEM switcher for other jobs, such as corporate events. As it has so many inputs and outputs, it is versatile and can be used for many jobs. Also, PlayStation and Xbox will support 4K soon, so we need to examine 4K streaming. The ATEM Constellation 8K supports up to 8K, so I feel secure it can be used 5 more years from now,” Abe concluded.