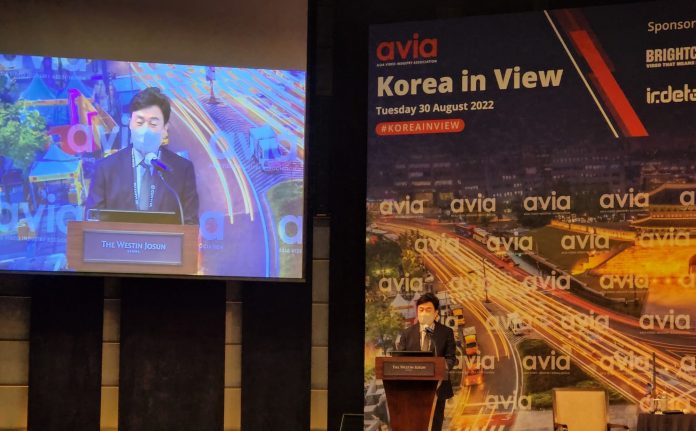 The Asia Video Industry Association (AVIA) welcomed over 200 delegates from across the region for its first ever Korean focused conference and its first in market event since 2019, with Korea in View, which took place on the 30th of August at the Westin Josun, Seoul.

To set the scene, AVIA CEO Louis Boswell presented key highlights from AVIA’s Korea in View 2022 Report. Ranking 10th among the world’s largest economies and 4th in Asia, South Korea had risen from one of the poorest countries in the world to a developed, high-income country in just one generation. The pay TV market continued to show growth of 2.7 percent per year, now dominated by IPTV, while streaming services were accelerating at breakneck speed, seeing paid subscribers increasing from 20.4 percent of the population in 2020 to 34.8 percent in 2021.

In his opening speech, keynote speaker, Vice Chairman Ahn Hyoung-hwan of the Korea Communications Commission (KCC) shared that while OTT growth was an opportunity for the content industry to grow, it was also resulting in a sense of crisis for existing legacy media. Hence the KCC was preparing the Audio-Visual Media Service Act and was pushing for innovative deregulation of the existing regulations on advertising and programming.

The day spanned multiple conversations about the strength of Korean content and how that was fuelling the success of both Korean streaming platforms as well as international, with Marianne Lee, Chief of Content Acquisition and Development, Viu and Junbeom Jeon, Chief Leader, Wavve, both agreeing that this investment in local content was the key to survival.

Such demand, however, was also clearly fuelling a rapid escalation in content costs and while Hyun Park, Senior Vice President, Global Division of Studio Dragon commented that from a Hollywood perspective Korea still presented great value for money, there needed to be a cap on costs before they got out of hand. He also noted, “We are definitely not at the peak of production, we are only at the beginning.”

The roles of international and Korean streaming platforms were also examined with Esther Ahn, Vice President, Streaming, Korea, Paramount, explaining the recent introduction of Paramount+ to the market in partnership with CJ-backed TVING.  The partnership spanned making Paramount content available within the TVING service in Korea as well as co-producing Korean content with a view to Korean and international audiences.

TVING CEO Jay Yang also talked about the desire to be able to take the best Korean content overseas and deliver it through a Korean streaming platform, although he did not believe Korean content should only be on Korean platforms.

The advertising market was also seeing the traditional markets of TV, Print and Radio declining but there has been significant growth in digital. This was an opportunity that both Bong-Su Kim, Addressable TV Ad Team Leader, SK Broadband and Vijay Kunduri, Regional Vice President, OTT/CTV, APAC, PubMatic, felt needed to be exploited with the growth of ad supported VOD or streaming services, with both being confident that this space would evolve quickly in the next two years in Korea.

Rounding up the day’s sentiments, Louis Boswell highlighted the importance of the Korean market not just because of the impressive growth it had seen for video content, but because of the influence Korean content has had across the region, and also the early stages of Korean streaming platforms looking to enter other Asian markets. “It is not possible to look at the Asian video industry without looking at Korea,” added Boswell.