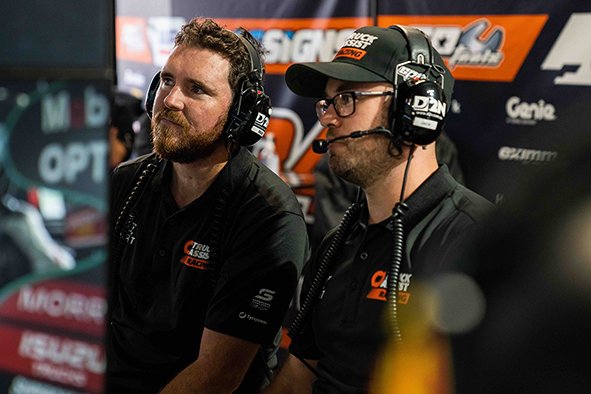 Matt Stone Racing (MSR) was first established in 2011 by team owner Matt Stone and is based on the Gold Coast in Queensland. MSR compete in various Australian racing championships and series and have won titles in the Dunlop Super2 Series, Touring Car Masters and V8 Utes. MSR has also been the backbone of developing young and successful talent in Australia. Recently MSR had a requirement for a high-end motorsport comms solution and for that they turned to the industry’s specialists – D2N Technology Solutions.

Matt Stone Racing Supercars’ Data Engineer, Marc Mastrodomenico, explained, “We needed some serious, reliable and high-end motorsport radio communications between the drivers, engineers and mechanics. In our sport that means there’s only one company you go to – D2N Technology Solutions.”

Mastrodomenico continued, “In the past headsets provided by third parties proved not to be up to the job in terms of build quality, strength, audio clarity and programming flexibility. However, since D2N have come on board these issues are no longer active.”

Mastrodomenico has had nothing but positive feedback about the excellent results achieved with the D2N comms solution.

He continued, “D2N’s MD, Jason Owen, is fantastic to communicate with. If ever there is an issue, we know it will be solved as quickly as humanly possible.”

During race events D2N-supplied headsets and radios are used while MSR’s cars are on track for engineers to communicate with the drivers, constantly updating them about all aspects of the race. Engineers will also speak to mechanics on “listen only” radios instructing what setups changes are to be made on the cars during pit stops. For MSR a typical signal path involves UHF analogue and digital Rx and Tx frequencies.

Mastrodomenico clearly has nothing but praise about the D2N solution adding, “D2N supplies us with the best dedicated motorsport radio comms solutions. Other products tried and tested by Matt Stone Racing have proven to be difficult to program and not last in the rough conditions motorsport presents. D2N’s solution is simply excellent and their friendly staff also provide timely support for their high-quality products. The whole package is brilliant.”

According to Mastrodomenico the D2N comms solution gives Matt Stone Racing a crystal-clear edge over its competitors.

He concluded, “The D2N comms solution gives us crystal-clear comms during loud intense situations. Jason and his team’s promptness in shipping out ordered items on time is excellent and we are never left waiting. The technical support we receive from Kenwood is fast and efficient via D2N and quite honestly the entire D2N sales, service and support offering is second to none.”

Matt Stone Racing recently confirmed that they will be entering the new Gen3 era of Supercars racing with the support of Chevrolet Racing. MSR conducted a thorough review of what would be best for the team in all key areas of the operation before coming to this very important decision for the team’s future success in Supercars.