Murray Tregonning’s MatchCom on the Field with RTS ODIN OMNEO

Murray Tregonning & Associates (MTA) was founded in 1978, by the charismatic man himself, Murray Tregonning. Having built the company into one of Australia’s leading consultancies, MTA is now known for providing the latest and best in professional audio, communications and tele-prompting equipment for the TV broadcast industry.

Recently MTA had a requirement for the very latest in digital talkback systems to be used with its MatchCom Sports Communication System in sporting stadiums across Australia and for the company turned to Magna Systems and RTS. 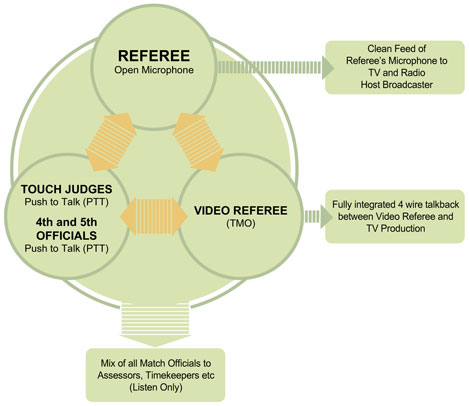 Match Official Communications is a radio talkback system that connects referees, umpires and off field officials to enable real-time feedback and communication during game-play. Designed for TV Broadcast, the MatchCom Referee Talkback System is expandable, if required, to allow for any number of match officials and to allow a video referee/umpire, coaches and timekeepers to communicate with all on-field match officials. The system further facilitates this communication for the video referee, by allowing for direct communication between the television broadcaster and the video referee to help direct the video replays for video decisions, and now even to a match official remote bunker. While not included in the ODIN roll-out, MTA also offers two variants of the MOC system, RefTalk, and DC Digi Ref Comms. RefTalk is a stand-alone system that allows for the main official to have an open-microphone at all times, with all other officials in the system only functioning on a Push-To-Talk basis. DC DigiRef Comms, meanwhile, a smaller communications solution capable of a maximum of five users.

As MTA’s Brian Cornish explained, “MTA were in a position where we had to replace our existing talkback system within our MatchCom communication system utilised for sporting/match official communications. We researched various systems and we took the time to see what would best suit our requirements and best service our clients’ needs. A big part of that research involved talking to and meeting with Lucas Bohm and the team at Magna Systems as they are the country’s top RTS intercom experts.”

After their initial discussions, Bohm went to MTA’s offices to see and expand on how they could help MTA with all of their intercom and talkback requirements. This was followed by an in-depth product run through and demo in the purpose-built demonstration room at Magna’s Chatswood HQ.

Cornish continued, “After the initial and further discussions and demos Lucas and his colleague Brett Campbell came back with all the latest RTS ODIN digital intercom matrices and keypanels and carried out a detailed proof of concept at the stadium. It was excellent as was their product knowledge and service.”

MTA’s intercom requirements for the new installations at various major sporting stadiums across Australia were comprehensive and detailed.

Cornish added, “We needed ultimate flexibility to satisfy the changing requirements of our clients. The RTS ODIN matrices recommended by Lucas and the Magna team fulfilled all of our requirements. As all MatchCom systems are flyaway-based, the 1RU form factor of the ODIN played an important part in our decision and despite its compact size, it still provides options that we want moving forward – such as its RVON capabilities which are definitely part of our future requirements and the direction we want to head in.”

The new RTS ODIN provides the platform to interface between MTA’s digital mixing system and the RF facilities used in the MatchCom communications system the company provides to various sporting codes for on the field and video review officials communications.

Cornish continued, “ODIN is a key part of the facilities that we provide to our customers and has now become a bigger part of our MatchCom system. The people using the RTS ODIN equipment are our technicians and it works perfectly. This in turn means the customers and codes that we provide our service to are all happy. It’s only part of the solution that MTA provides and it’s excellent.”

With the new RTS ODIN system installed and working perfectly Brian Cornish felt that there was one last thing he had to add to the story concluding, “To date the ODIN matrices have performed without any issues – they just work. ODIN suited our purposes, is easy to setup and first time users adapt quickly. It’s also worth pointing out the role that Lucas, Brett and the Magna Systems team played in all of this as their sales, service and support is second to none and we couldn’t have done it without them.”