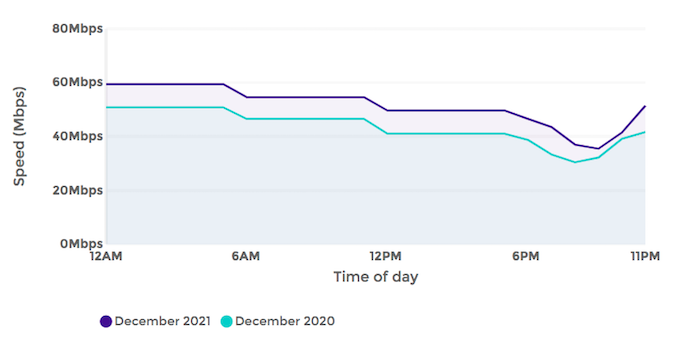 In December 2020, when the MBA program first started measuring NBN fixed wireless, the corresponding results were 78.5 percent and 68.4 percent respectively.

The improvement in download speeds is due to a change NBN Co made in July 2021, which allowed a 15 percent overprovisioning allowance on the download component of NBN fixed wireless plans. Some retail providers have passed-on this change to their customers.

The boost in download speeds meant that in December 2021, 98 percent of Fixed Wireless Plus services could support five or more simultaneous high definition streams, compared to 81 percent of services in September 2021.

“It is pleasing to see consumers on NBN’s fixed wireless networks are also benefiting from the improved download speeds that we have seen on the NBN fixed-line network. Upload speeds, however, which are increasingly important for a range of applications including working from home, gaming and sharing files, are generally flat on both fixed-line and fixed wireless,” ACCC Commissioner Anna Brakey said.

Retail service providers’ average download and upload speeds across NBN fixed-line networks during busy hours were between 95.1 and 103.3 percent of plan speed in December 2021.

“Speeds are holding up well when the majority of Australians are online at the same time during the busy evening hours,” Ms Brakey said.

Internet provider Launtel features for the first time in the report. In December 2021, Launtel achieved 98.4 percent of download plan speed during the busy evening hours, compared to an average of 97.4 percent across all major NBN plans and retail service providers.

“Having an emerging retailer with above average results to the larger telcos is good news for consumers and competition in the residential broadband market,” Ms Brakey said.

The proportion of fibre to the node connections that rarely record speeds above 75 percent of their plan speed increased slightly to 13 percent of the ACCC’s sample in December 2021.

“There are a significant number of consumers on fibre to the node connections that are not performing as well as other network connections. It is disappointing that progress by NBN Co and retailers to improve these connections has stalled,” Ms Brakey said.

Other superfast networks performing well but higher drop-outs for some

This is the first Measuring Broadband Australia report to include results for superfast broadband access services supplied by Uniti Group, that operates a number of superfast access networks through Opticomm and LBNCo. About 400,000 Australians connect to the internet through superfast networks other than the NBN.

In December 2021, average download speeds on Uniti’s fibre to the premises connections were 101.6 percent of plan speed during the busy evening hours. In comparison, NBN’s fibre to the premises connections had slightly higher average download speeds of 103.1 percent of plan speed during busy hours.

Uniti services experienced higher drop-outs, or outages, per day than NBN services on average. The relatively higher outage rate was driven by a small number of services, suggesting that drop-outs are an issue for some consumers connected to the Uniti network. Uniti services recorded 1.75 daily outages, compared to 0.3 on NBN services.

Upload speeds on Uniti’s fibre to the premises connections were on average 88.1 percent of plan speeds during busy hours, compared to 90.9 percent for the NBN equivalent.

“Expanding the program to cover additional networks improves the long term value of the MBA program by making it useful to more broadband consumers. It also enables us to identify potential areas for improvement on NBN and other superfast networks,” Ms Brakey said.