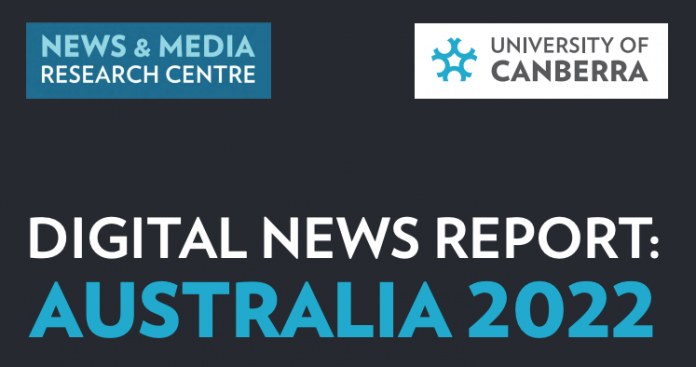 The number of Australians paying for online news has increased to slightly higher than the global average, but trust has decreased to pre-COVID levels, according to the Digital News Report (DNR): Australia 2022 released by the University of Canberra’s News and Media Research Centre (N&MRC) today.

The research team surveyed more than 2,038 adult Australian news consumers and found that 18 percent are now paying for news, five points higher than last year and now sitting above the global average (17 percent).

“This year’s data reveals promising signs that digital news subscriptions are gradually growing, and Australians may be acquiring the habit of subscribing to digital news content, after a long period of stagnation,” according to DNR lead author, Sora Park.

The report found 28 percent of Gen Y are paying for news (up 12 points from last year), as young people in Australia being more likely to pay for news continues, in contrast to the global data.

However, in comparison to other online media, news subscriptions are still faring worse, with 67 percent of Australians paying for video streaming services, 45 percent for music and 21 percent for audio books or podcasts.

“Very few consumers indicate that they will increase the number of online media subscriptions and younger consumers don’t want to be tied down to a single subscription, so the increase in paying for news may be a short-term lift,” Dr Park said.

Following the ‘COVID-19 trust bump’ at the height of the pandemic, trust in news continues to fall to pre-COVID levels.

This year’s report found news trust in news had fallen slightly to 41 percent (down two points from last year), to return to its long-term trend.

“COVID-19 was an opportunity for news media to pause sensationalism and regain trust. However, this trust was not sustained,” said Dr Park.

“Many Australians do not believe news media are independent, or that they put society first. And these perceptions are linked to a deep cynicism and mistrust in news.”

The research team found that low trust in news may be linked to how news organisations manage personal data, as less than one-third (30 percent) of respondents trust them to use their data responsibly.

The report also found a correlation between those with low trust in news, and higher levels of avoidance; 77 percent of those who do not trust news, also avoid news.

Just one third of Australians are interested in news about environment and climate change, with one in five reporting they don’t listen to news of that nature.

The report found the two main predictors of disengagement are age and political orientation, as those over 76-years-old and identifying as right-wing are most likely to disengage (35 percent and 29 percent respectively).

“The survey found there is a much stronger demand for news to play an advocacy role in reporting climate change than general news. For general news, people want news outlets to reflect a range of views, so they can make up their own mind about an issue. However, when it comes to news about climate change, four in ten say news outlets should pick a side.”

“This is a notable departure from a tradition of impartiality that many news consumers appear to find increasingly untenable in the face of the climate emergency.”

Respondents reported wanting more news focused on what governments and large companies should do about climate change (42 percent), compared to individuals’ responsibility (16 percent).

The report also found concern about climate change is increasingly divided across the political spectrum, with 81 percent of the left, but just 32 percent of the right expressing concern.

Those in regional areas remain less concerned about climate change.

Other key findings include:

The full report is available here.