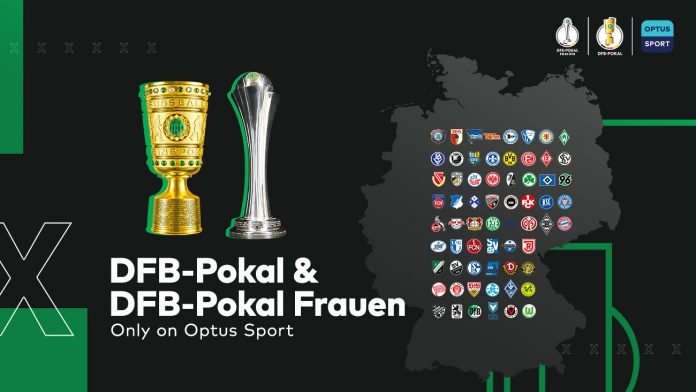 Optus Sport continues to expand its football offering after securing the exclusive Australian rights to the DFB-Pokal and DFB-Pokal Frauen for the next three seasons.

The DFB-Pokal is Germany’s biggest and most prestigious cup competition, held annually by the German Football Association (DFB) and running from August through to June. 64 teams participate in the German Cup, including all clubs from the Bundesliga.

Optus Sport has also secured the rights for Women’s German Cup, the DFB-Pokal Frauen, which is the main national women’s football cup competition and includes some of the women’s game’s top sides, led by eight-time defending champs VfL Wolfsburg and nine-time winners Eintracht Frankfurt. The competition was established in its current format in 1991, has 49 teams and runs alongside the men’s competition through to May.

“We know our football fans will be happy with the addition of the DFB-Pokal and DFB-Pokal Frauen, as Optus Sport continues to deliver the world’s best football to our customers,” Optus VP TV, Content and Product Development, Clive Dickens, said this week.

Dr. Holger Blask, Managing Director of the DFB GmbH & Co. KG, said, “We have seen the continued growth of Optus Sport and its world-class approach to streaming top-class football. Germany’s premium Club Cup competitions will definitely be in good hands and Optus Sport will reliably provide Australia’s fans of German football with the best live matches, in-depth analysis and insightful support programs around the DFB Cup.

“We are very excited about this multi-year agreement covering both the men’s and women’s competitions, a fact we are particularly proud of and one that will take the DFB Cup to a new level in Australia.”

Since 2016, Optus Sport has brought the world’s best players and fixtures to Australian football fans through its live and exclusive broadcasting of the Premier League and later, the Barclays FA Women’s Super League, with Optus Sport recently renewing and extending its arrangements with both competitions.

Optus Sport has also recently added LaLiga and holds the Australian rights to the FIFA Women’s World Cup 2023, the J.League and UEFA National Team Football including the UEFA Nations League, all UEFA EURO 2024 qualifiers, all UEFA European qualifiers for the 2026 FIFA World Cup, plus a range of international friendlies, all available to Optus Sport subscribers.

The DFB-Pokal Frauen gets underway first on Optus Sport, with Ingolstadt taking on Bayern Munich on Wednesday (13 September AEST) morning. This will come off the back of a big weekend of women’s football as the FA Women’s Super League 2022/23 season commences on Saturday 10 September.

The 1st round of DFB-Pokal matches have already been played, running through July and August, with Hertha Berlin stunned by second tier Eintracht Braunschweig despite taking a 2-0 lead and third tier SV Elversberg knocking out Bayer Leverkusen in an epic that ended 4-3.

VfB Lubeck (foutth tier) and Stuttgarter Kickers (fifth tier) are carrying the flag for Germany’s minnows as we head into the 2nd round, which is where Optus Sport picks up coverage.

The 1st round of Women’s DFB-Pokal are also in the books. Optus Sport will broadcast selected games from the 2nd round onwards as Eintracht Frankfurt kick off their campaign against Weinberg, Ingolstadt host Bayern Munich and FSV Gutersloh takes on the might of defending camps Wolfsburg.