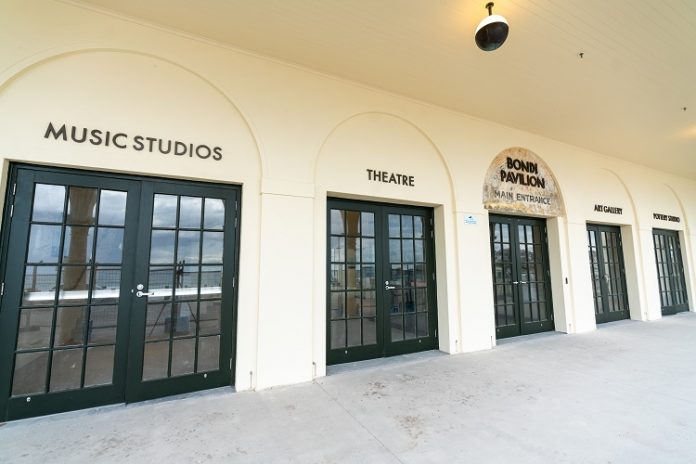 For generations, the extensive heritage-listed Bondi Pavilion – part of the iconic Bondi Beach landscape – has been familiar to Sydney locals, visitors and tourists alike. Waverley Council has recently undertaken a project which sees the Pavilion structure upgraded and rejuvenated.

The P.A. People was appointed as systems integrator after winning the tender process. TZG was the consulting architect, Dark House Productions managed the design for the theatre side of the Project, while WSP was responsible for the audio-visual systems and how the various endpoints would be connected. Buildcorp was the builder appointed for the Project.

Justin Smith – Contracts Administrator, Buildcorp said of the relationship with The P.A. People; “I would place them in the top tier of contractors that we have worked with on this project. Ross Ford has been across – and often, ahead of – all relevant aspects of the integration and has accommodated the program all the way through.”

According to Project Manager for The P.A. People, Ross Ford, “The two AV consultants worked under TZG. We worked with all three consultants on the various aspects of the project, the most important of which was its heritage listing – whereby we had to maintain the original building and its elements. This consideration dictated how the project was conceived and executed by all parties.”

Rather than demolish and build anew, this was essentially a ‘dismantle and rebuild’ approach. Across the site, the team had to ensure that the original fabric of the separate spaces was maintained. This meant that the original building materials – from the flooring to the timberwork – had to be kept intact, and elements such as murals and paintings had to be protected during the course of all works.

“We were provided with a fully compliant design and AV specification, and we built according to that brief – with a list of equipment which we procured and integrated,” adds Ross Ford. “We had the option to offer alternatives, which would obviously be assessed by the various AV consultants, though I would say that we supplied probably 98% of the project as per the original specifications, as those selections were deemed to be most appropriate.” 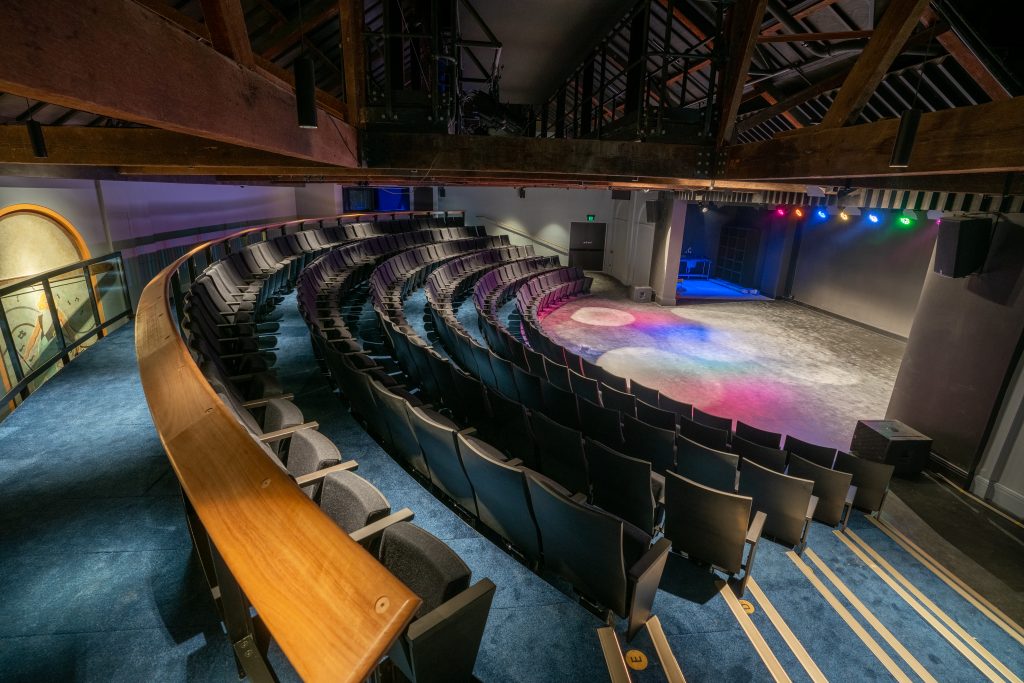 The largest of the spaces at Bondi Pavilion is the main theatre (above), with a 300-seat capacity. It is fitted with a 7.1 surround sound Martin Audio system. QSC amplifiers and a QSC Q-Sys Core 510 DSP server on the backend. An Allen & Heath Avantis console and microphones complete the audio system.

On the video side, there are two Panasonic 780 series 9000 lumens (brightness) projectors with the appropriate lenses paired with a Screen Technics 275” front projection screen and a portable 147” Stumpfl rear-projection screen. Panasonic vision mixing as well as Panasonic broadcast cameras are also employed.

Control is provided via Crestron CP4 processor and two 10-in Crestron touch panels. The control system manages the AV set up, including the motorised screens.

In the Seagull Room, a Panasonic 670 series projector and motorised projection screens are featured. QSC 8-in ceiling speakers with Lab.Gruppen 8.2 amps provide audio and an Allen & Heath SQ5 portable mixer has also been provided. 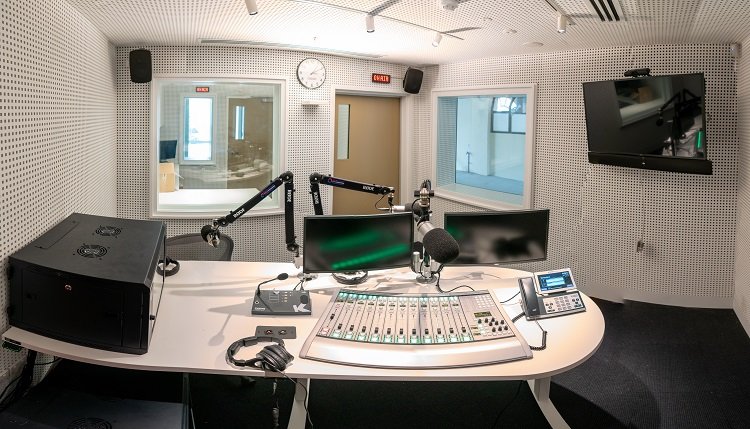 AV over IP has been extensively used site-wide at Bondi Pavilion for signal transmission, as Ross Ford explains.

“With cabling distances and the relative complexity of getting them from one location to another, (and heritage site considerations mentioned), AV over IP was deemed as the best solution. Given those distances, it would have been problematic to use SDI. A majority of the endpoints – being plugged in using HDMI – an SDI solution would require a lot of signals to be converted. Also, the control of the projectors and motorised screens are IP based. Standardising on one cable – Cat6a across the whole site – made terminations easier and was an effective choice. This also afforded the option to be able to send and route feeds anywhere across the whole facility and use any of the additional rooms for overflow.”

Three 48-port Netgear 4300 series network switches connected via 10Gb fibre backbone connections have been used to cover the site. Cat6a cabling is used in the rooms and spaces.

“For a site this complex, we needed it to be a Layer 3 switch with snooping – along with a several other requirements in order to maintain the integrity of the Crestron NVX system – and Netgear was the obvious choice,” says Ford.

Dante was employed to provide a simple site-wide solution using standard Cat6a cabling for increased reliability and low latency. This assists audio transmission across the facility with AES being used in conjunction with Dante in the main theatre only. Crestron NVX encoders enable video transmission over IP.

While AV over IP solved a lot of problems, it was not a simple solution, says Ross Ford.

“I brought up NVX at our first site meeting with the audio consultants and architects. While reviewing the documentation and considering heritage site issues, I presented some dummy plywood samples of the NVX box at the meeting to illustrate the footprint of the box so that everyone knew the size of the product. We couldn’t cut holes in the walls and the floors so we had to be clear upfront about how the encoders and decoders would be accommodated in the spaces.”

He continues: “Working with the architects, the builder and the consultants, we came up with a few unique ways of fitting the NVX into the spaces. We have some larger patch boxes which house the NVX with a relatively short HDMI cable standardising the connections for the end user. The steel box has a removable cover so that the items can be serviced; the boxes are vented and have built-in fans.”

The decision to go with projection is also an interesting one.

“Projection lends itself to the spaces of Bondi Pavilion. The display does not have to be operational in the spaces at all times and the spaces are also multi-functional,” says Ross. “So, an LED videowall would not necessarily work especially in the theatre where you have to be mindful of sightlines. And when we want to shift the spaces for a different kind of event, the LED would have to be dismantled. The flexibility of projection meant that we could avoid this, and the new laser projectors are easy to maintain and have good lifespans.”

On the 7.1 audio system in the main theatre, Ross Ford says, “Technical Audio Group, the distributor for Martin Audio, provided an audio plot which detailed the layout of the speaker locations within the theatre; they then completed the final tweaking and testing of the system. The requirement for 7.1 audio came from the video format through the Blu-ray player being used, which is providing 7.1 output, and the vision desk can feed 7.1 format as well.

“This was an interesting project where we battled Covid-19 challenges and supply shortages. For example, the original specification called for two Q-Sys Core 110 DSPs. One would be dedicated for the theatre and the other for the outer rooms. However, at the time of the Pavilion project, QSC was experiencing supply difficulties with the 110 DSPs; so we chose to go up to the 510 DSP to maintain the number of inputs and outputs, and also to get a bit more horsepower on the DSP side of things. I think it has actually proven to be a better solution in practice. Thankfully we have been able to manage it through the course of the project by either upgrading or using our expertise to procure the equipment.”