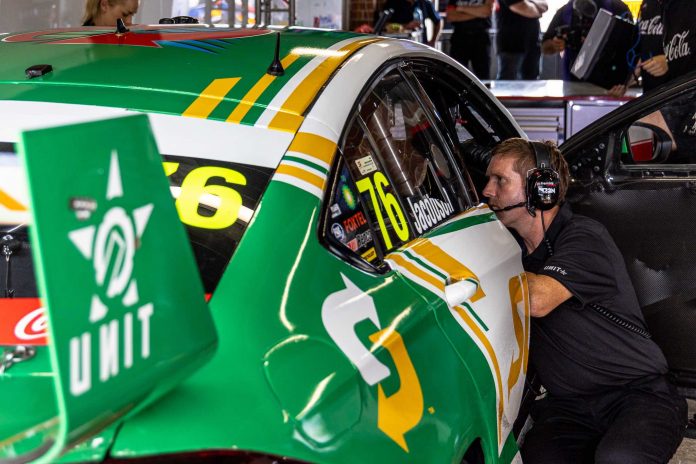 When Peter Xiberras purchased Tekno Autosports he also acquired a company with a long and successful history of using D2N Technology Solutions. Thus, when PremiAir Racing required a custom comms solution for their new team, according to Tim Newton, Engineer for Garry Jacobson on Car #76, the decision to use D2N was a no-brainer.

Newton said, “There really was little reason to look elsewhere. Jason Owen at D2N has road-mapped an exciting and cutting-edge suite of bespoke updates for the team. He also understood our priorities around reliability and the highest quality two-way communication between engineer and car. We also need and they provide, on-race service and support as our events are predominantly conducted over the weekends.”

For PremiAir Racing D2N has implemented a Kenwood NX3300 handheld solution for interaction between car, engineer, crew and Supercars own production feed for track and car solutions.

D2N is also developing a closed-door intercom solution to allow open channel feed for driver and engineer, layered with specific options for digital feeds, whether that be data engineers, tyre engineers or even fans interacting on their smartphones.

Newton added, “D2N supplied and programmed all the handsets for the 2022 season and supported the engineering group from a technical perspective to create bespoke solutions for each of the team members. The crew have quickly got to terms with their handset settings, the car controller has had clear comms with both cars and the D2N solution has integrated seamlessly, allowing us time to spend elsewhere hunting down performance. The drivers report clear comms and the team remains calm due to good information flow. In short, the D2N comms solution is the best type of comms solution.”

It’s clear Newton and the entire PremiAir team are very impressed with the D2N solution as Newton added, “The D2N solution provided by Jason Owen gives us a clarity of comms and the engineers the flexibility to create bespoke programming solutions for individuals. This is further enabled by the extremely high-level service at D2N. D2N is a Tier 1 supplier and its support and service are without comparison. We literally wouldn’t use any other comms solution from any other supplier.”

Newton also remarks that while other suppliers may have the some of the same hardware, it’s the D2N service and support that gives PremiAir Racing a competitive advantage.

Tim Newton concluded, “D2N and their excellent comms solution give us confidence, clarity and engineering capacity to chase performance on the track. They also give us the confidence to go straight to performance-orientated tasks during the race weekend and not get bogged down in maintenance and cumbersome radio issues. Basically, I’m delighted to say that D2N and their comms solution are an integral and invaluable part of the success of the PremiAir Racing team.”