‘Saigon In The Rain’ Shot and Graded with Blackmagic 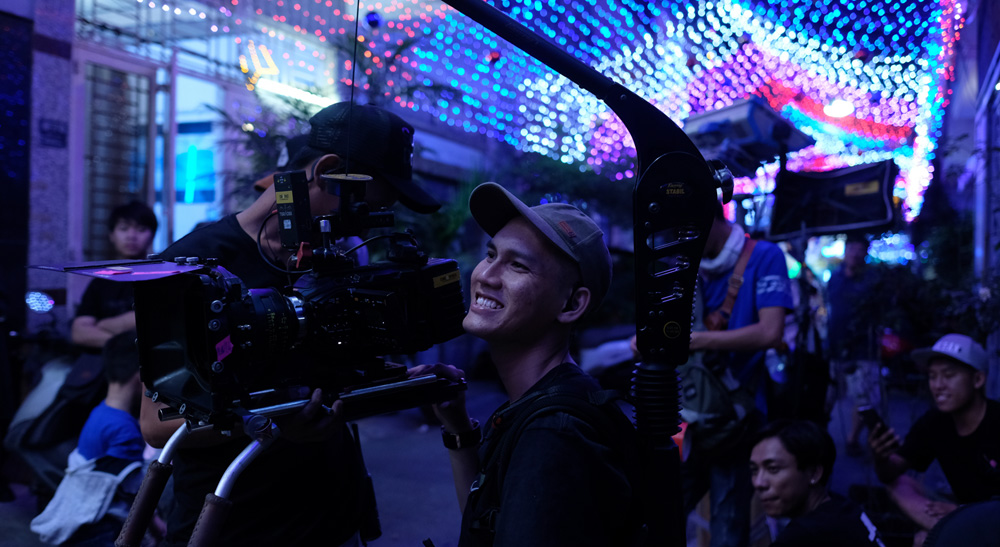 The romantic comedy, the latest full length feature from filmmaker Le Minh Hoang, tells the story of a dreamlike, scholarly and talented musician who has his first love with a woman full of life and mystery. The two accidentally meet each other on a rainy night in Saigon, and find love at first sight.

The film, lensed by Nguyen Khac Nhat, takes place among the vibrant colors of Saigon, both sunshine and at nighttime in the pouring rain. Shot over 35 days and 20 locations, the ability to be easily moved, set up and broken down was essential and was one of the biggest advantages for Nguyen shooting with the URSA Mini Pro G2.

Khac Nhat said: “This is really my first time working with this camera, and I am very happy about its structure. I used a lot of camera movements where the camera was on a dolly track, gimbal or handheld mode. Assembling and switching accessories back and forth with the URSA Mini Pro was very convenient, and did not take much time thanks to the camera’s convenient design and its compact form factor.”

The URSA Mini Pro G2 was essential in capturing the most important shot of the film, where the two main characters accidentally share the same eave because of the heavy rain. The director wanted to shoot that scene with a wide angle and using two different colours, blue and red, to split the frame into 2 parts.

“Because of its importance in the storyline, I did put all the manpower and equipment I could get for that scene,” he said. “In the frame, I created different spaces with colours such as a blue lightbox, red lanterns, a streetlight and thunderbolt lightning created with a Skypanel S360,” Khac Nhat said. “So, there are a lot of colours in one frame, but the URSA Mini Pro captured and handled it very well. The other thing I worried about was how it captured the movement of the raindrops in that colourful spaces. In the end, it turned out very well with righteous details and colours.”

With the dramatic changes in lighting and a tight budget which forced the crew to have to use only natural sunlight during the day scenes, Khac Nhat had to rely on the URSA Mini Pro G2’s high dynamic range. In particular, there were two scenes where the main characters show their true feelings for each other. The scenes were underexposed, where Khac Nhat used only one light.

“I find the URSA Mini Pro G2 sensor to be really good. It can record high details even with low light shooting, which was my main concern for the night raining scenes. The G2 gives me a good amount of details, from the raindrops to lightning effects with high light intensity,” he said. “Because of the limited budget, for the external day scenes, I had to make use of 100% sunlight. I really like the sun in Saigon, so I wanted to bring it into the film as much as possible. And this camera helped me to do it perfectly, without any clipping in the highlights.”

To capture footage, they used Blackmagic RAW, switching between constant quality Q0 and Q5 recording. Using this, Khac Nhat was able to prioritize image quality and file size for predictable and consistent file sizes as he switched between high movement shots of characters riding or running, or in slow motion.

“I used Blackmagic RAW Q5 for most of the film and for the slow motion or movement shots I used Q0. This let me complete the shotlist each day with less data storage, while still keeping its high quality. The amount of data per day is very moderate, which makes the DIT’s workload a bit easier,” he said.

Bui Cong Anh added: “When the primary correction was finished, I sent VFX shots in ACES EXR to Unn Thanh, a VFX artist I have collaborated with many times, so he could create anything envisioned by the director. Then I transferred the looks from original shots to VFX returns with just a few mouse clicks, voila, everything is perfectly matched without pain.”

“I created some minor VFX inside Resolve, painting out objects, putting an airplane touching down from afar just from the footage. To finish the movie, from my good experience in previous projects, I decided to go again with Resolve to assemble high quality graphics to create titles and credits rolls. I also asked subtitle makers to create subtitles with Resolve, which was super easy and best compatible with my project. Because Resolve can handle so many assets within a project well so I have no problem mastering and delivering Sai Gon in the Rain to anywhere without ever leaving Resolve for once.”

Regarding working with Blackmagic RAW files in DaVinci Resolve, Cong Anh said: “It’s a huge plus for me since all the RAW controls are mapped to my Resolve Mini Panel so I can go very fast. Then I put Power Windows needed to adjust specific areas and curves to alter density to the likings of the director and DP, who often liked a cooler look from what he saw onset.”

“Also, I decided to use Resolve’s Offset Printer Light hotkey to create an overall look for each scene. When the DP made a decision, I hit a point in a precise and predictable way and controlled the shadows and highlights precisely with Log Wheels mapped to knobs on my control panel,” he continued.