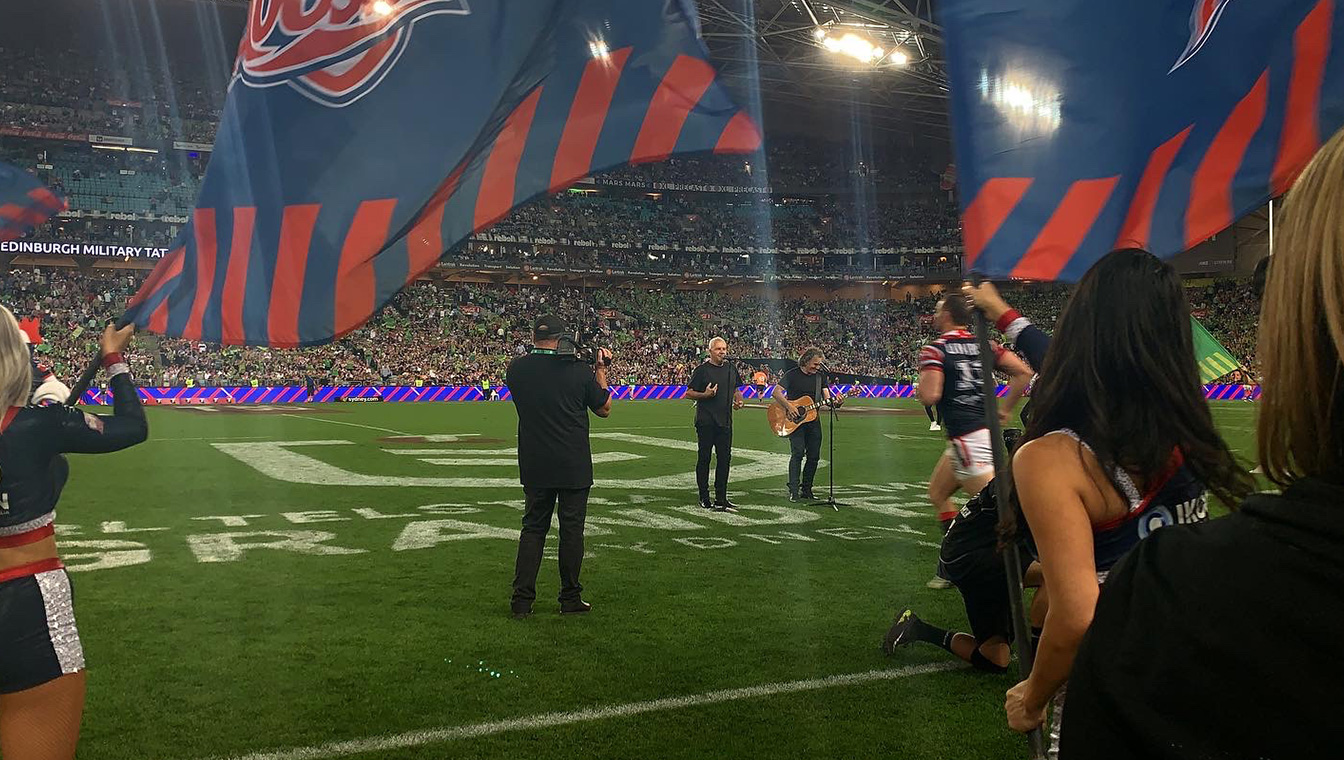 On Sunday October 6, the Canberra Raiders squared off against the Sydney Roosters at the NRL Grand Final in front of 82,922 spectators at Sydney’s ANZ Stadium, with millions more watching the broadcast. Impressive numbers – as was the 229 radio microphones active at the ground that Peter Twartz, Radio Frequency Manager for the Stadium and the NRL, had to coordinate to work flawlessly with one another.

“At JPJ, we wouldn’t use anything else but Shure Axient for this kind of application,” declares Wayne Mulder. “The mics have to work when millions are watching, and Axient Digital’s performance is flawless. I trust Shure Axient completely – it turns on, does what it says it’s going to do, and even in the crazy, hostile RF environment of the NRL Grand Final, it’s bulletproof.”

Wayne and the JPJ team chose four handheld ADX2 transmitters for the main vocal channels, running in dual frequency diversity mode. This mode sees a redundant signal transmitted from the ADX2 to the receivers, which automatically select the best signal from the two independent frequencies. Both are automatically managed, and change undetectably if RF problems occur.

Another huge advantage of using the ADX2 is Shure’s ShowLink control system, which enables parameters like gain and channel to be changed remotely without having to physically touch the transmitter. “ShowLink is fantastic,” agrees Peter Twartz. “You have total control over what is usually only available from the panel on the transmitter. If a singer belts it out louder than you bargained for, you can take the gain down while they’re on stage. I like to think of ShowLink as insurance in case there’s anything you end up wishing you’d done before you gave the performer the mic!”

JPJ deployed a site-wide fibre optic network carrying both Dante and MADI for interconnectivity, making integrating Dante audio from the Shure Axient receivers a simple matter of connecting to the network. Settings in the transmitters themselves allow JPJ to keep control data streams and Dante separate. Three AXT600 Axient Spectrum Managers were used to monitor and control the top, middle, and lower tiers of the stadium respectively.

Amazingly, the whole system needed only two antennas to cover the entire ground. “The MCs could go up to level seven on the far side of the stadium and do an interview with their ADX2s,” relates Wayne. “Nothing else could have given us that kind of coverage. We didn’t have to run in Quadversity mode and use four channels for one transmitter, but the option was there. Just running in dual frequency diversity mode gave us peace of mind, because you never know when a random reporter is going to turn their RF device on. We didn’t have to turn the power up on the receivers either, which kept our noise floor low.”

New zone management features in Shure’s Wireless Workbench software made the almost mathematically impossible task of coordinating nearly 400 fundamental frequencies and their intermodulation distortion products (IMDs) achievable for Peter Twartz. “Wireless Workbench is exceptionally good with its Zones,” explains Peter, “either geographical Zones or time-based Zones, which you can individually select. Between zones you can choose to care about fundamental frequencies being unique, but not IMDs, which is an important distinction as IMDs aren’t as critical. The latest version of Wireless Workbench has also added the capability to distinguish when Zones are physically far enough apart to not care about fundamental frequency overlap, and determine which frequencies need to be clean and IMD-free, with whom, and when.”

“If we’d tried to create a frequency and channel structure that was IMD-free, it would have been impossible,” concurs Wayne. “The ability for the new version of Wireless Workbench to create six or seven Zones and then adjust the IMD and frequency settings where they overlap is fantastic.”

“At the NRL Grand Final, we had Channel 9 and NEP working on the TV broadcast, and ABC radio, Triple M, the Continuous Call Team from Macquarie, and NRL Nation, all using radio frequencies,” outlines Peter. “In the stadium, we had Encore Event Technology and AVE running 36 channels in function rooms between them, all just a sheet of glass away from the field. Add to this multiple news crews and others using wireless mics. While we try hard to document and manage them all, some make it past us on the day. This is where Shure Axient Digital and all of its spectrum management tools is a life saver.” 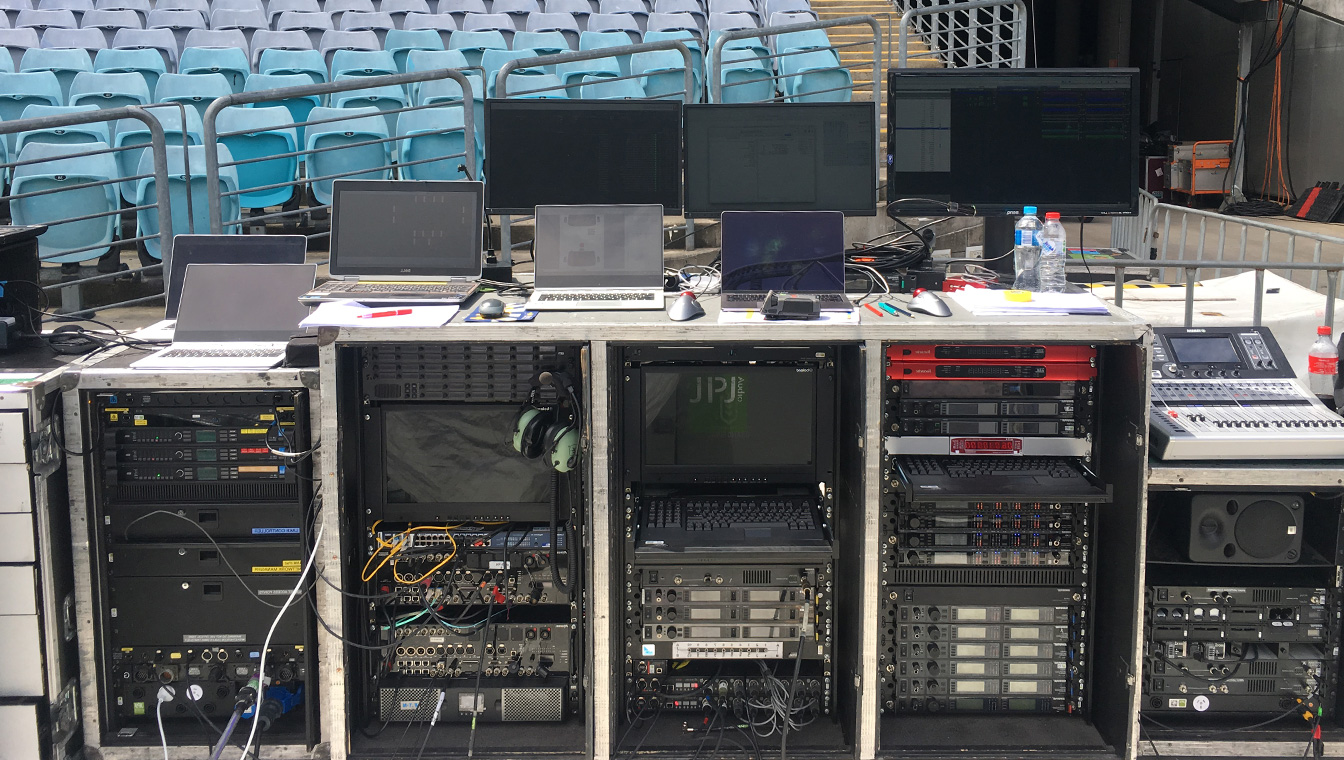