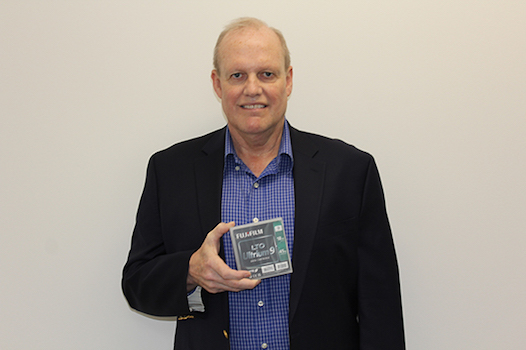 Stutch Data has taken delivery of the first pallet of FUJIFILM LTO-9 tapes in Australia. LTO-9 is the latest generation of LTO tape technology released with a native capacity of 18TB and up to 45TB compressed. According to Stutch Data GM, Richard Stutchbury, the future has never looked brighter for LTO tapes.

He explained the company’s decision to buy the first lot of tapes to enter the country saying, “Many LTO resellers and users around Australia consider us market leaders in the LTO tape space and therefore we had to ensure we had the tape to supply to the customers who have installed or are installing LTO-9 tape drives. These tapes have 1.5 times the capacity and faster write and read speeds than its predecessor LTO-8 tapes.”

Stutch Data’s clients use LTO tapes to store cold, archive or little used data to save costs of keeping it on more expensive and less reliable mediums like spinning hard disk drives and flash storage.

Stutchbury added, “Other uses include cloud providers backup and archive, government and corporate backup, archive and tiered storage, security footage from permanently mounted cameras and body worn cameras as many police departments are returning to tape due to this large amount of 4k footage. LTO tapes are also used for recording film and TV footage, film special effects and editing and many medical applications. In fact, there are so many uses it is hard to keep up with the ways they are being used. Then there’s the fact that the LTFS option allows users to drag and drop files straight onto tape which is another great benefit.”

Talking of benefits, Stutchbury sees many when using LTO tape over other media such as SSD.

He continued, “Customer peace of mind is a big part of it, a little like insurance. IT budgets are constantly being squeezed to get the most efficient use of each dollar. There are security and regulatory record keeping requirements, data can be invaluable for future marketing and customer service system improvements and lastly tape is more environmentally friendly than hard disk, flash or cloud due to its low carbon footprint as it uses no power once it is written. It is a unique data storage medium providing an air-gapped isolation system which created it and therefore it can be the last line of protection against cyber-attacks like viruses and ransomware but also human error or a disgruntled staff member. LTO tapes are portable and can be taken offsite and stored in a secure location until required in the future.”

Stutchbury also notes that LTO tapes are the lowest cost per TB of any data storage medium (up to 80 percent cheaper than disk over the lifetime of the data) yet are also the most reliable and secure storage medium available.

He adds, “They have a high capacity, are scalable, secure due to the air-gap and they can be encrypted. They have longevity from accelerated testing simulations and cannot crash or be hacked. Many of these factors have created another use called nearline storage where files are available online through a tape library at slower speeds than spinning hard disk drives and flash storage but more reliable and at a much cheaper cost. Nearline storage helps reduce cloud restore costs.”

As far as Stutchbury is concerned using LTO tapes as a storage medium for the future has no parallel as FUJIFILM are selling more LTO tapes than ever.

He explained, “We are often told by small to medium customers, we are using the cloud now instead of tape for archive and backup. Funny thing is ‘the cloud’ is just a mixture of tiered storage like tape, flash and disk managed by a large cloud service provider, so essentially if you are moving from your own tape system to the cloud, you are just outsourcing it to someone else, and if you need your data back you pay a lot more than storing it on tape in the first place. Not to mention losing control of the data and the high cost of restoring data, and the bottlenecks to getting large amounts of data back due to line speed limitations. Cloud service providers still need to make a profit, so they charge a lot less to store data but a much larger charge to restore it.”

For Stutchbury and Stutch Data their LTO tapes of choice are FUJIFILM LTO tapes and there are many good reasons for that decision as he explained, “We and many of our customers use FUJIFILM LTO tape as they are one of only two tape manufacturers of LTO tape in the world. They work closely with the tape drive manufacturers and technology developers and constantly test and retest the tapes they produce both for quality and for data protection in the harshest of simulated environments. These accelerated environmental tests show data can be retained on LTO-9 tapes’ Barium Ferrite tape particles for more than 50 years!”

When asked to predict the future for LTO tape in Australia and globally Stutchbury said, “In the short term we should see some users move away from tape but more come back to, or start using tape for the first time. There will be steady growth in the use of LTO tape by cloud providers, government and corporations for archive, backup and nearline storage. In the medium and long term, we should see continued increase in use by the above users and applications but there will be a move back to tape in house for many small, medium and some larger data storage organisations. Certainly, cloud has its place in a data storage hierarchy, but it is for more immediate storage of data collected in minutes or hours, but longer than that it will be moved to slower and cheaper storage mediums of which tape will continue to be an important part due to its cost and reliability. Spinning hard disk drives are nearing their end of life and will become redundant due to the technology reaching maximum capacities and speeds, higher costs, lesser reliability and lack of scalability. In short LTO tape will be there for the foreseeable future for lower speed and high-capacity data storage and air-gap requirements, as there simply isn’t another better, more viable and more cost-efficient alternative.”