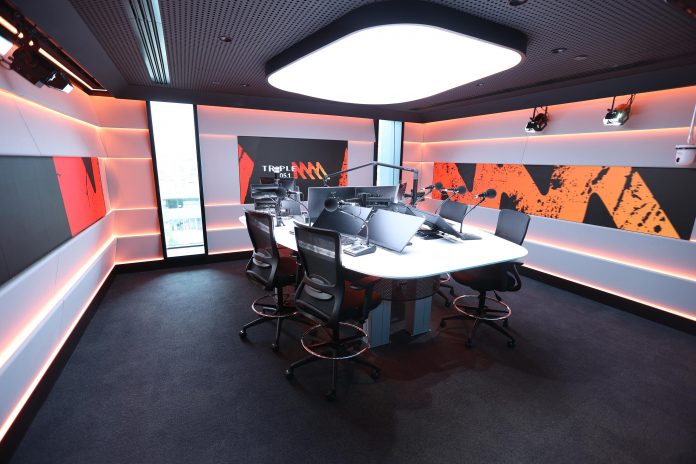 SCA’s new studio featuring Telos Alliance audio broadcast processing equipment
With more than 45 radio markets and over 160 radio stations with 24-hour layout, SCA has been using AoIP technology from Telos Alliance since 2009. Consistently moving and transitioning teams across 45 radio markets, SCA has been able to manage, structure, and support measures across all broadcasts into their main Sydney, Australia building.

Telos Alliance’s R&D department has worked closely with SCA in developing the systems and methods to turn SCA into Australia’s most diverse entertainment company with audio reaching over 95% of Australians. SCA’s new studio transformed their streaming capabilities. They combined the audio power of more than 3,000 pieces of Telos Alliance equipment from xNodes, Axia Consoles, Pathfinder Core and more with SCA’s own new visual capabilities, which evolved their radio broadcast and media production.

The ability to transition into a new phase with ease is part of why they continually choose Telos Alliance to help them create, innovate, and lead radio broadcast and entertainment media. SCA boasts an unrivaled portfolio of Australian multimedia brands such as Triple M and Hit Network; they own and operate 99 radio stations across FM, AM, and DAB+ radio. SCA also operates LiSTNR, Australia’s free audio destination for consumers, housing radio, podcasts, music and news. They also broadcast 93 free-to-air TV signals across regional Australia, reaching 2.7 million people each week–all with the help of Telos Alliance equipment and team.

Dan Jackson, SCA Head Of Engineering – “In our audio on demand spaces, the spaces without the radio consoles, we are utilizing Pathfinder Core panels that integrates in our lighting systems, signage system and a Fusion engine to manage all those space from an audio perspective, all from an iPad on a Pathfinder Core panel that way there’s no computer screens no controls, you can take the desk out and put a couch in.”

“We’re a big user of Pathfinder Pro, moving to Pathfinder Core has been a challenge but the flexibility and use of the panels are perfect and exactly what we need.”