The P.A. People are no strangers to large scale public events, and in May 2022 the team were called upon to create what is possibly one of the world’s largest temporary event communications networks and a significant audio system in Cockle Bay for Sydney’s iconic Vivid Sydney festival.

Vivid Sydney is the largest festival of Light, Music and Ideas in the Southern Hemisphere, transforming Sydney’s CBD into a fusion of creativity, innovation and technology for 23-nights, from the 27th of May to the 18th of June during 2022. 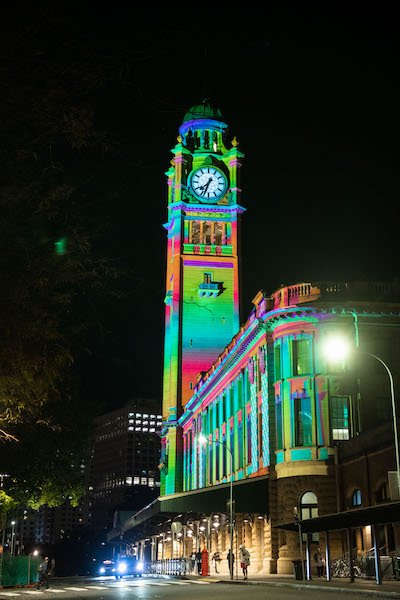 Along the Light Walk, the temporary event network provided a comprehensive IP backbone to support the distribution of content for a series of LED wayfinding signs, cameras, an emergency paging system, and centralised sound pressure level monitoring. The network was based on existing in-ground dark fibre cable, temporary tactical fibre and a range of high-capacity wireless links, to achieve a high availability and resilient topology.

The network also supported the provision of internet services for both staff and various light installations, as well as connectivity to the ‘cloud’ for real time data analysis to support event operations.

As part of the communications package, in addition to the network and various end points around the event footprint, The P.A. People also provided a comprehensive communications framework to support the event team. Some 600 digital two-way radios over 44 talk groups on the Orion network were deployed, interfaced with a large Clear-Com Eclipse matrix intercom system comprising some 60 key stations installed in six separate event control rooms across the city. The intercom system was also extended with a FreeSpeak II Full Duplex system and additional Key Stations at the Overseas Passenger Terminal to provide production intercom for the opening night ‘First Light’ Welcome to Country and Performance and the Paramount+ Drone Show at Vivid Sydney – the largest in the Southern Hemisphere.

“It was a privilege to be involved in the delivery of this years’ Vivid Sydney Festival. After more than a year of planning and a couple of postponements, it was great to be able to get out and deliver the network and systems to support the Vivid Sydney production team, particularly given the crowds that came out in record numbers this year,” commented Dom Jones, The P.A. People’s Project Manager for the event.

Vivid Sydney will return in 2023 from the 26th of May to the 17th of June. For more information go to www.vividsydney.com and get social using @vividsydney #vividsydney