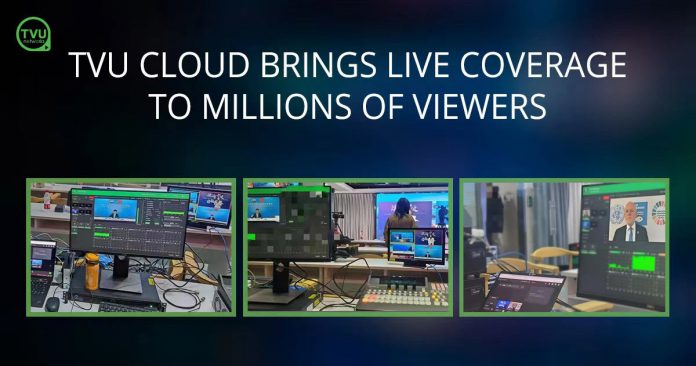 TVU Networks, the provider of cloud and IP-based live video solutions, has announced that Ningbo TV (NBTV), part of China Central Television (CCTV), used its solutions to host a live, large-scale media campaign delivered to over 1000 media organisations around the world.

Situated near the Hangzhou Bay in Zhejiang, China, the port city of Ningbo serves as the eastern port of the “Maritime Silk Road,” playing a key role in China’s cultural and commercial connection to the world.

To honour its deep ties to the ocean and affirm the city’s ongoing role in global commerce, NBTV hosted “Ningbo: Setting Sail to Embrace the World,” an interactive media event that linked 15 historic coastal cities from around the world. Dozens of overseas guests took part in high-level interviews, speeches, and presentations celebrating the importance of the ocean to people everywhere.

NBTV needed to ensure that audio/video transmissions from remote and overseas locations met the network’s high standards. Production teams also wanted to guarantee guests from any location could interact and participate in discussions and presentations as if they were in the same room – without fluctuations in latency.

TVU One and TVU Partyline addressed both challenges. TVU One mobile transmitters allowed journalists to bring live, synchronised coverage of events from different locations around the world with virtually zero latency. For example, TVU One helped reporters gather and transmit footage from the event’s opening ceremony, which was held simultaneously in multiple locations integral to Ningbo’s historic and coastal roots. With TVU One, journalists seamlessly transmitted live footage and commentary from the opening ceremony to NBTV stations and other media organizations around the globe.