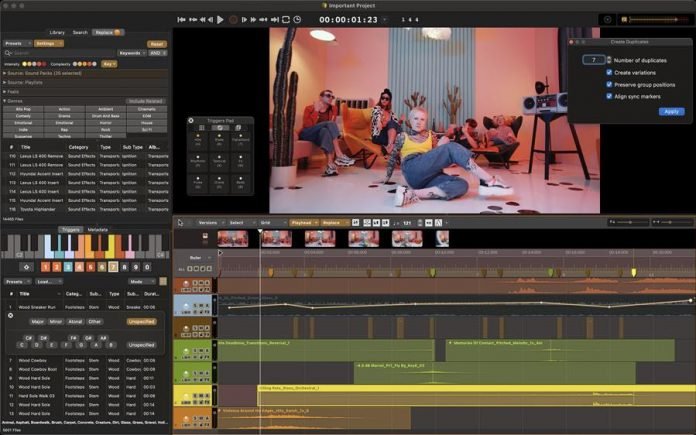 Audio Design Desk, the creative tool that has revolutionised how artists create audio for video, recently geared up for its showcase at this year’s NAB Show with the public beta release of ADD Audio Bridge, a new audio extension for Final Cut Pro that puts powerful sound design tools directly in the FCP timeline. Audio Design Desk, or ADD, is an entirely new breed of Digital Audio Workstation that uses AI-assisted content creation tools to enable filmmakers, editors, sound designers, streamers, and creators to produce cinema-quality sound for video in seconds. Launched in May 2020, the ADD crew has waited two years for an opportunity to “WOW” the crowds at NAB, the US’s largest gathering for the media and entertainment industry.

“The NAB Show has long been the nucleus of the media and entertainment industry, providing a space for companies to share their latest innovations with the community. This year, we’re thrilled to finally be exhibiting amongst our peers in Las Vegas at the first in-person show since 2019,” says Gabriel Cowan, CEO of Audio Design Desk. “We launched ADD in early 2020 and have been expanding our powerful tools with top-shelf integrations like Final Cut Pro and Frame.io, and adding over 20,000 original sounds to our libraries. We’re so grateful to the many people – filmmakers, sound designers, creatives – who have participated in the evolution of ADD. For those who will be seeing it for the first time at NAB, prepare to be amazed!”

Audio Design Desk, a sound design platform that can be used standalone or as a seamless integration with NLEs like Final Cut Pro and Adobe Premiere, completely transforms the process of adding music and sound effects to picture, cutting down what can typically be a full day project to just a few minutes. ADD comes with more than 40,000 royalty-free sounds, loops, and music cues in its library, each of which is assigned identifying characteristics using Sonic Intelligence and carries an embedded sync point for placing sounds perfectly on the timeline. The user simply imports a video file into the app, and presses keys on their keyboard – H for hits, R for rises, D for drones, and so on – effectively using the QWERTY keyboard to play ADD like an instrument. To see ADD in action, watch Gabe Cowan and team demonstrate the technology with Brie Clayton of CreativeCOW here.

New at NAB 2022 was the launch of ADD Audio Bridge, Audio Design Desk’s native extension for Final Cut Pro. The sleek integration will enable editors to create transitions, titles, foley, and music cues with the only DAW built to find and place audio for video directly inside FCP. For the first time, video editors will be able to create soundscapes for their projects seamlessly from inside Final Cut Pro. Larry Jordan calls it “very cool!” saying, “This vastly simplifies finding, editing, timing and modifying sound effects and music – directly within Final Cut. An extension is a lot more than a plugin. It’s advanced software that runs an entire application inside Final Cut.” To start using the beta of ADD Audio Bridge, visit add.app and download the latest version of Audio Design Desk.

In just two years, Audio Design Desk has become a SXSW innovator, won an NAB best of show award, was named a 2022 CES innovator, won Fast Company’s Next Big Thing In Tech, won Videomaker Magazine’s Best Software of CES 2022, and is nominated for the prestigious 2022 NAMM TEC award. At the start of the year, the team launched ADD 1.9, which introduced auto-compose, MIDI triggers, instant variations, intelligent import, and a Stream Deck integration, among a dozen other exciting new features for audio and video professionals and creatives. They have even more in store for NAB. Visit them at booth C9818 in Central Hall for a live demonstration and to meet the team.