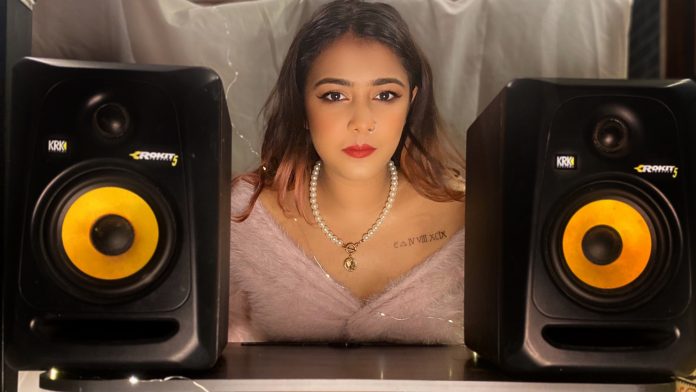 One of India’s youngest guitar sensations, Esani Dey, is best known for her music composition for various Bollywood films including Bala, Houseful 4, Hichki, Yeh Saali Aashiqui, PM Narendra Modi and many more, as well as her role in MTV’s Unplugged for three seasons strong. Growing up in a household where the day started and ended with music, Dey embarked on her professional music career at just seven years old. She first started using KRK studio monitors in 2011 after being gifted a pair of ROKIT 5 G3s, which she has deployed for all of her work ever since.

Spending countless hours in recording studios from a very young age, Dey is accustomed to the quality of top-performing studio gear.

“The depth and balance of KRK studio monitors is amazing,” says Dey. “I’ve used many other brands in studios throughout my career, and for my needs as a guitarist, KRKs are a perfect choice. The tweeter provides the best clarity possible, and the outcome is extremely clean, with a very tight low-end. KRKs are definitely the best studio monitors available at their price point.”

Having been using her ROKIT 5s for the past decade, KRK has proven to surpass the test of time for Dey, having remained strong and true to their sound. In addition to deploying KRKs for all of her home-studio productions, Dey recently turned to her ROKIT 5s to record two new singles, “Mistake” and “Jam5” as well as the song “Murshida” for the 2017 Indian drama film Begum-Jaan.

With studios gone dark for the majority of 2020, Dey found herself spending most of her days mixing away in her home studio.

“During these pandemic times, musicians have been 99% recording from home, and for me, my KRK speakers have been my best friends. I had the time and opportunity to make a lot of great music over the past year and a half, and it wouldn’t have been the same without my ROKIT 5s.”

Although she plans to keep her ROKIT 5s close-to-home for many more years to come, Dey looks forward to upgrading to a new pair of KRKs in the future.

“I’ve been seeing more and more KRK monitors pop up in studios around the world, and I totally understand why. The sound quality just can’t be beat and I’m excited to upgrade my KRKs in the near future!”