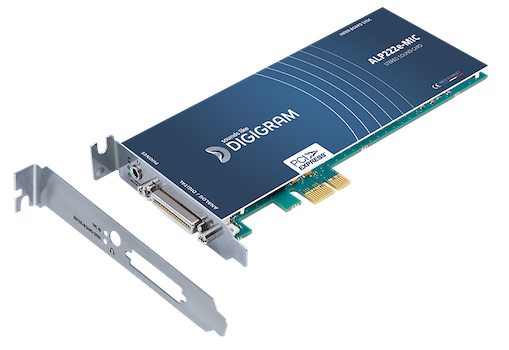 The French audio equipment manufacturer Digigram has announced the release of two new sound cards, ALP-222e and ALP-222e-Mic as part of the ALP-X range.

The new ALP-X range comprises a series of digital and analogue sound cards with improved features that will gradually roll out throughout 2022 to replace the legacy Digigram VX sound cards. ALP-222e and ALP-222e-Mic are the first two cards of the range to be released on the market.

Available April 2022 via Digigram’s network of distributors, both ALP-222e and ALP-2222e-Mic cards embed the signature features of VX222 sound cards: pristine sound quality for playing and recording (for the ALP-222-e-mic version), and a robust design to provide the utmost reliability. “Digigram VX cards have been a milestone in the audio business for the past 20 years, and their reference features have been widely acclaimed” says Nancy Diaz Curiel, Digigram’s Director of Sales, Marketing and Communications. “We are thrilled to open a new chapter with the new ALP-X range, with untouched sound quality and reliability. Both cards will seamlessly integrate broadcast studios or automation systems where high sound quality and robustness are key” adds Diaz Curiel.

In addition to their reference features, ALP222e and ALP222e-Mic have benefited from new developments for enhanced performances: a slim, form factor design will increase flexibility and allow larger, embarked applications on any PC, while Windows and Linux systems compatibility are among the extra features. “While capitalising on the trustworthy VX legacy, these new developments on the ALP222e and ALP222e-Mic are taking the whole range to a next level” declares Stéphane Bert, Digigram’s Presales Manager. “When critical communications are at stake, accurate and reliable ALP222e and ALP222e-Mic are the perfect fit for audio and industry applications alike” states Bert.

On top of the traditional broadcast industry, the new added features to the ALP-X range enable Digigram to address the global industry for all sound sensitive applications where reliability and performance are paramount: emergency systems, critical communications, and 365/24/7 run applications.

Other additions to the new range include analogue and digital streaming at the same time, an embedded mixer with drivers available from Digigram website.

Based in the French Alps, Digigram currently has two offices in France and Singapore. The professional audio market acclaimed its IP-based audio contribution solutions (IQOYA range) for their continuous and agile support to the broadcast industry in times of lockdown. Swiftly deployed, the IQOYA range featured Digigram signature user-friendliness and reliability to enable the media to remote broadcasting seamlessly.