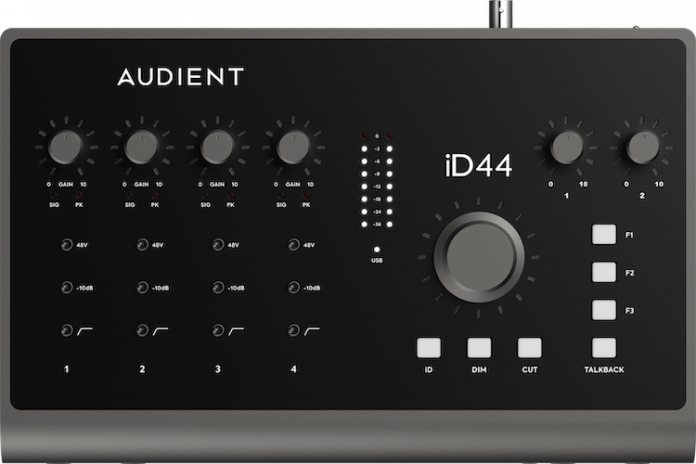 Freelance sound engineer and producer Tony Faulkner added iD44 (MKII), Audient’s newest audio interface to his mobile recording setup recently. He is one of the first owners of the British company’s most powerful interface since its launch.

With a long record of orchestral recording, Tony is regularly out and about recording classical and light music in different venues around the world. Quickly becoming au fait with his new Audient gear, it was important that it took as little fuss as possible. “Joy of joys, it all worked first time straight out of the box!” he says.

Recording chamber music performed by BBC Philharmonic Orchestra’s Principal Clarinet, John Bradbury and pianist Ian Buckle, Audient wanted to hear Tony’s initial thoughts about working with this second generation audio interface in the field. “Great. Premium sound quality,” he says. “Being able to add an ASP880 for extra channels is very useful as is the talkback facility. Having four inputs means we can record ambisonics.”

Tony appreciates the enhancements that set the iD44 (MKII) apart from its predecessor, too. He highlights the iD44 (MKII)’s ‘ultra high quality’ and ‘low latency’ in particular. “The two headphone sockets with individual volume controls are handy too,” he continues. With both a ¼-inch jack and a mini-jack, three sets of headphones can be plugged into the iD44 (MKII) at once.

Commenting on the size of the unit: “I’m used to dragging heavy rack cases. iD44 (MKII) is very compact for projects where I have to pack everything into a carry-on for a flight. It’s particularly compact considering everything the iD44 (MKII) can do. There’s no compromise on quality.”

He’s also very pleased with the Audient Nero studio monitor controller, which he bought at the same time as iD44 (MKII). He says the monitor controller has “better sound quality and more flexibility” compared to his previous setup. “It’s  been excellent. Premium quality and very useful having multiple headphone outputs and inbuilt high quality DAC. Quite a few classical music producers like to monitor on headphones and the Nero makes this easy. It has better options for talkback too, including being able to plug in an external mic,” he adds.

“I’ve been using Audient tech for many years and I have a lot of respect – and gratitude – for their combination of high quality, usability and determination not to break the bank,” he says. (He already owns an ASP008 and two ASP880 8-channel mic pres.) “I’ve made hundreds of albums using the Audient pres!”

With a packed schedule of location recording over the coming months, Audient hopes he will record hundreds more with Audient gear. Thanks for sharing your thoughts, Tony!