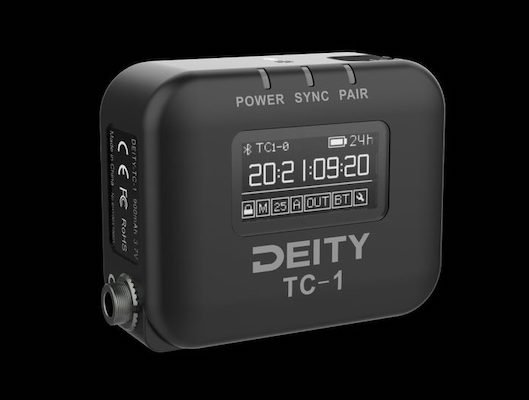 Deity Microphones is announcing two new products and a phone app that make up their new timecode ecosystem. The TC-1 is a wireless timecode generator and the TC-SL1 is a wireless smart slate. Deity premiered prototypes at the NAB Show in Las Vegas back in April and is now showing them off to the general public for the first time. They have also opened pre-orders through dealers online.

Both the TC-1 and TC-SL1 can wirelessly pair to a cellphone or MacBook using Bluetooth and the Sidus Audio App that Deity has also launched. The app allows users to remotely control all the settings on both devices, display battery life, and wirelessly sync all their timecode generators to a single source. Users will get 250ft of wireless range.

Along with Bluetooth remote control, both timecode devices can also be controlled using the on-board menu navigation with the 1” OLED display. This allows users who prefer confirmation of timecode via a screen the option to use the device without needing a phone. The TC-1 can also receive timecode from another generator, like a professional sound recorder, and then transmit out that SMPTE timecode signal to all of the TC-1 and TC-SL1 units within 30ft on set via a secondary 2.4G RF radio. This secondary wireless sync feature means the TC-1 can fit seamlessly into different workflows.

“We wanted to make this new ecosystem appeal to people who love cellphone apps on set but also those who desire a more tactile approach to their gear,” said Andrew Jones, Product Manager at Deity Microphones. “We felt this was the next innovation in timecode equipment, a combining of features that have been scattered across other pieces of gear.”

The TC-SL1 is a timecode smart slate designed for the TV/film industry. It’s the world’s first slate to feature Bluetooth control and also ships with a rather unique method of power. Instead of using AA batteries like all other slates, the TC-SL1 is powered using NP-F550 rechargeable lithium battery packs. These are the same batteries often used by the camera department, the individuals who will look after a timecode slate after it’s been synced by the sound department. This new battery method for a slate allows for 300 percent  more battery capacity, hot swapping, and charging via the slate’s 25W USB-C port (another world’s first for slates).

“When we started to design the TC-SL1, one of my biggest goals was to move slates away from AA batteries and into a more renewable power solution. AA batteries are fine when it’s just two and the device is small, but when a device is the size of a slate we need to start to think about ways we can incorporate denser, rechargeable power sources that are better for the environment,” Andrew said. “We even went as far as to design our own NP-F550 battery packs that provide 32 percent  more battery capacity than the average NP-F550.”