Inside The Mix with Ana Monte 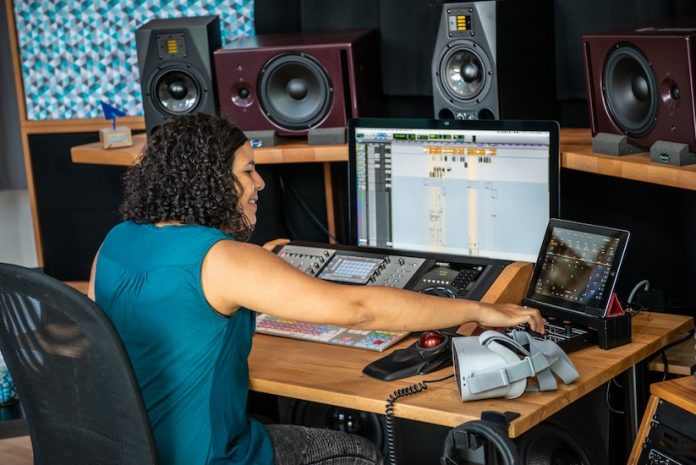 Q: How did you get your start in this industry?

A: I was born and raised in Rio de Janeiro, Brazil, where my love for music was first discovered. From the age of eight until 18, I studied piano at the “Rio de Janeiro State Music Conservatory.” After graduation, I went on to earn a bachelor’s degree in Music Industry and Technology from California State University, Chico.

Following my undergrad, I moved to Germany to earn my master’s degree in Film Sound and Sound Design at the renowned German film school, Filmakademie Baden-Württemberg. Soon after graduating, I co-founded DELTA Soundworks, an immersive audio production facility located in Heidelberg, Germany, with Sound Engineer Daniel Deboy. Our projects span across virtual reality, 360° films and gaming, as well as planetarium shows and amusement park rides.

Q: What was it like starting out as a woman in the industry?

A: I’ve always been used to the fact that women are in the minority in this industry; we unfortunately make up only about five percent of audio professionals. For me, it’s something that was just always there. I’ve never personally had any big problems, even in college, where women were also in the minority, but I know it was tougher for older generations of women. I haven’t faced a lot of discrimination in the industry, and I really like working with people of all backgrounds. I feel lucky because I have the experience of knowing different languages and cultural experiences. Being Brazilian and outgoing, and using humour, has helped me a lot.

That said, I have noticed that I do get invited to a lot of events and panels just because I am a woman. This is good not only for personal networking, but also for the benefit of building up women in the industry by giving them visibility and showing that they are just as capable as men. Interestingly enough, a couple jobs that I’ve been offered, also came through because I am a woman. For example, when I used to do more documentary work, I would get invited to do the location sound for projects that have difficult topics, such as those related to women, children or marginalised groups, among others. I was invited to work on those because I am a woman in sound, but they also brought me a great source of pride.

Q: What are you doing now?

A: Now that immersive audio is growing in popularity, we have started to work more exclusively on the types of projects that place you inside the story. Included among these is the multi-award-winning virtual reality (VR) project called BlautopfVR,  a series of three experiences that is available online, in app stores or in the STEAM store, and was produced by SWR, a German tax-funded television channel. While it was developed as an entertaining journey, it is educational as well. It takes viewers through one of Germany’s largest cave systems, Blautopf, under the Swabian Alps, which has been explored by only a small number of people. The footage was captured using photogrammetry, a method in which you take several photos and stitch them together into a 3D environment. Since sound could not be recorded on-location, it was our job to recreate the soundscape and its acoustics in the studio using a virtual model. This was tricky because the acoustics of each cave is different, so we calculated the reverb in real-time using ray-tracing technology.

This project was nominated for Germany’s top video game awards and recognitions and was also selected for Virtual Worlds at Filmfest Munich. It received the ‘Innovation Award’ and a ‘Best Sound’ nomination from the Deutscher Entwicklerpreis (German Developer Award), as well as being nominated for ‘Best Innovation and Technology’ at the Deutscher Computerspielpreis (German Computer Game Award). This was an especially rewarding experience for us.

We also worked on the soundscape for Pirates in Batavia, a popular attraction at Germany’s Europa-Park. We were hired to do the sound for the ride just as the pandemic had started, so it was challenging for many reasons. For this attraction, guests are sitting in a boat and go through various 3D scenes. Each scene has different ambient smells and sounds, such as an Indonesian market or battle scene, for riders to feel fully immersed in the adventure. Though we were working remotely, we were able to collaborate with the ride designers to develop a proprietary process that ultimately resulted in a perfectly synced soundscape. The project was really a lot of fun to work on.

Q: What types of NUGEN Audio software and plug-ins do you use to problem-solve on your projects?

A: I use Halo Upmix for sound design, especially to create atmosphere sounds, like a cave or forest. I plug in my source, and Upmix just works; it’s really great. I don’t have to spend hours tweaking the sound just to have it only serve as a bed to add extra elements on top. We also recently integrated Paragon into our toolkit, which allows us to basically create completely new spaces and has been especially helpful for the immersive sound projects. Using these tools in combination with each other allows us to add more depth to our projects. For example, maybe I want an extra explosion and then we’re in the middle of a pirate battle. They both work really well for tasks like that.

For our standard film, television and streaming projects, we deploy NUGEN’s Halo Downmix and Loudness Toolkit heavily. Those metering tools are fantastic and the fact that NUGEN has the seal of approval from Netflix and Dolby proves that they are very reliable.

Q: Can you give us an instance where NUGEN Audio has helped solve a specific problem on a project?

A: We designed the sound for another Europa-Park film attraction in a dome theatre called Snorri’s Adventure, which is presented in 360 degrees. The amusement park character “Snorri” goes on an adventure under the sea. For this project, the composers recorded beautiful orchestral music, but it was done in stereo. The venue where this experience is held has a ring of loudspeakers and then some other loudspeakers scattered around the ceiling. It isn’t like a typical loudspeaker format that you find in planetariums and other places. We deployed NUGEN Upmix for a majority of that production, to pull it from stereo to surround by spreading the sound from the front to the sides a little bit. It was great to be able to mix it into this whole immersive sound format that’s now being offered, which is really nice.

Q: What advice do you have for people getting started in the industry?

A: Be more confident. I find the younger generation to be more shy and not as vocal. Be more outspoken about your skills, but also remember to listen and respect those who were here before you. They will help guide you on how to deal with clients, how to tell them what can and cannot be done, and how to stand up for yourself. You need to be able to step out of your comfort zone. And network, through social media and by attending sound events. You’d be surprised to see how many fellow sound colleagues are willing to help people starting out in the industry.

Q: What advice do you have for the industry overall to be more inclusive?

A: I think the audio industry should take a page out of the VR playbook. There are a lot of women there and I think it is encouraging for other, younger women to have role models. I give a lot of presentations at events that support startups and women in business, which doesn’t necessarily have to do with audio, but I know that seeing me in that role encourages young women and lets them know it is possible to do and be whatever they want. A female CEO is just not something that we see very often, but we are out there. Representation matters!

I also think there needs to be more diversity in industry panel discussions. So often, there are the same speakers over and over again, and many are from the older generation. There’s nothing wrong with that, but for the younger, more diverse generation, I think it would be great for people attending the conferences to see their own backgrounds reflected on the stage.