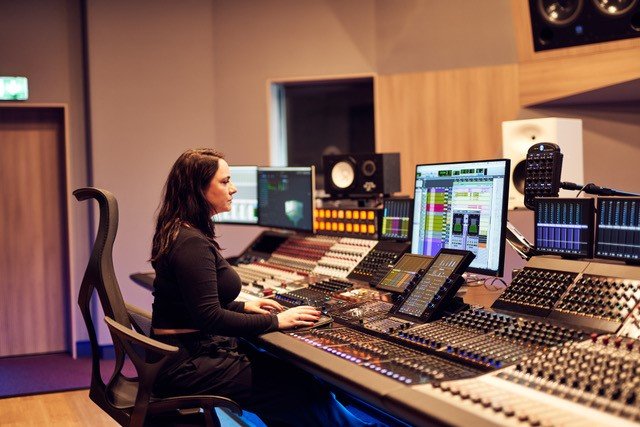 Q: What was it like starting out as a young woman in the industry?

A: I was very blind to the whole idea of women not being in this industry at first. I was 17 when I started out, so I was very young. At that age, you don’t think about gender or any of the obstacles that come with being female. Audio school was fun and easy for me, so I decided to follow that path. After moving to Los Angeles, I realised early on that whenever you’re in a studio as a woman, unless the people know you, they will usually assume that the guy knows more.

It was only then that the reality of the industry hit me like a bag of rocks. My first day interning at this pop studio was just disappointing – I didn’t even get to look at the console. I became so determined after that point, so I tried to give it my best all the time. Even when I had no idea what I was doing, I had good intentions. I never let my lack of experience stop me from working hard.

Q: What are you doing now?

A: I specialise in Atmos, film and record mixing. It was Alan Meyerson who got me into film scoring. While it was hard work (he works every day of his life!), it was also very rewarding, and I loved it. I eventually moved on to freelancing and dictating my own schedule, which is very liberating. It works for me because I love to work hard on a project, go all in and then finish it off and give myself a release before moving on to the next job.

I recently worked in Dubai on the live show Why? The Musical from A.R. Rahman and Shekhar Kapur. Prior to that, I assisted with the score mix for the “Dune” movie and did the Atmos mixes for the soundtrack release, in addition to mixing the score for Amazon Originals’ adaptation of “Cinderella.” I used NUGEN’s Halo Upmix plug-in for those projects. Some of my other recent film projects include Secret Headquarters, No Time to Die, Minions: The Rise of Gru, 9 Bullets, Love and Love Not, and Falcon Lake. I’ve also been working on some music recordings with a couple of bands.

Q: What types of NUGEN Audio software and plug-ins do you use to problem-solve on your projects?

A: I work in film scoring, so we’re often given stereo stems. If we need to do a surround mix, we need to upmix it. So, NUGEN’s Halo Upmix has been extremely helpful. Scott Michael Smith, a popular film score mixer, got me into it. He has this template where he’ll take certain sounds and copy and paste them to a new track with Halo Upmix on it.

On certain stems, if it’s a synth, you can drag and drop. I’ve started doing that, including on Amazon’s Cinderella. It was the first project that I used Halo Upmix on. I experimented with it and really liked it, especially mixing the orchestral samples.

Q: What is it that you like most about NUGEN Audio plug-ins?

A: With film, because we mix samples, I use Upmix a lot now, especially whenever I have a surround mix. I did the Atmos mixes for Dune, and NUGEN worked really well for that project. It’s so easy to use. The software is just genius, and I love that you can adjust the volumes of the different sides. What I’ll do is print the vocal track and then an effects track, and I’ll upmix the effects using Halo Upmix to create an effects surround but keep the vocal in stereo. It enables me to get creative and really helps me just specialise tracks.

Q: What advice do you have for women and other young people getting started in the industry?

As women, we bring an energy to the table that’s quite a bit different from our counterparts. It’s just a little more laid back sometimes, and it’s a little less egotistical. In general, women have to work harder, they have to be extremely smart, and they have to walk this fine line of being assertive but not too assertive. For young women, I try to tell them not to be afraid. Just go into a job with the mindset that I did when I was younger, which is just don’t be scared to mess up and, of course, stay true to yourself at your core.

Generally, if you’re good at what you do and you find your community, you’ll be just fine. Things will always happen, both good and bad, so it’s important to find your support system. Finding someone you can go out with while also talking shop is a great stress relief and a great way to learn as well.

Lastly, what you bring to the table is what is going to define your career as an engineer, including how you react to situations. Be courageous and definitive with your decisions when you’re working, and that will steer you to where you’re going to end up.