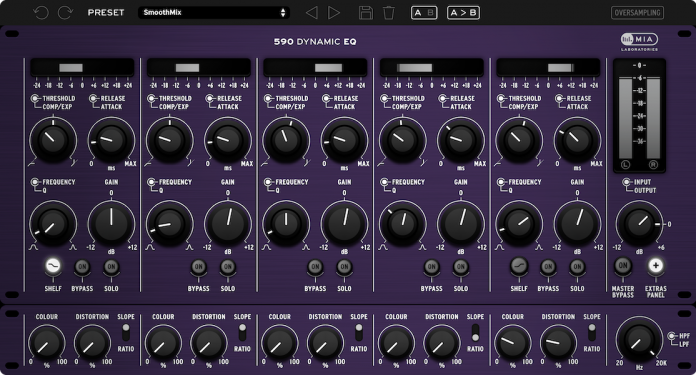 MIA Laboratories and Plugivery Distribution proudly announce the arrival of the 590 Dynamic EQ.

After many months of development MIA Laboratories are thrilled to release their latest  product, the 590 Dynamic EQ. It is another fine addition to their expanding line of software products based on the premium audio hardware found in world class recording studios.

It is now available from the MIA Laboratories website and through Plugivery’s network of Pro Audio resellers worldwide.

The 590 is a 5 band Dynamic EQ, offering dynamic equalisation under MIA Laboratories’ envelope detector, based on the analogue envelope detector circuit. It features parallel band compression or expansion under double precision processing and can be operated in x4 oversampling. ‘Color’ and ‘Distortion’ can be applied to each band, delivering a characteristic analogue feel through Tube or Class-A – flavoured equalisation  and a fine-tuned Triode distortion algorithm.

Each band of the 590 can be operated in compression or expansion mode, with attack and release times reaching up to 200 ms and 2.000 ms, respectively. Under the hood, MIA’s custom envelope detector, used in 925 and 409 compressors, utilises the classic feed-back topology, resulting in smoother and more controllable dynamic response. The user is able to select between more subtle or aggressive dynamic response, by switching between ‘Slope’ and ‘Ratio’ modes.

The ‘Color’ knob, coming from the Musiqual EQ Series, applies a specific set of filters to enhance the harmonic and subharmonic frequencies, related to the selected main frequency. This creates a more natural and musical result, often accompanied by a profound change in timbre.

Another intrinsic characteristic of analogue gear is the harmonic distortion, a ‘defect’ that the musical industry eventually embraced over the years, rendering it essential to the sound that we are used to. ‘Distortion’ knob emulates the corresponding harmonic distortion introduced by a Triode vacuum Tube amp when driven ‘hot’. The user has control over the amount of distortion applied to the signal – without the need of additional gain stages, easily achieving the characteristic analogue feel.

Using the top bar, the user can navigate through presets, undo and redo actions with a click, as well as compare different configurations using the A/B feature. 590 comes with a number of MIA Presets, while it also offers the ability to create custom presets, accessible through the dropdown menu from all instances of the plugin.