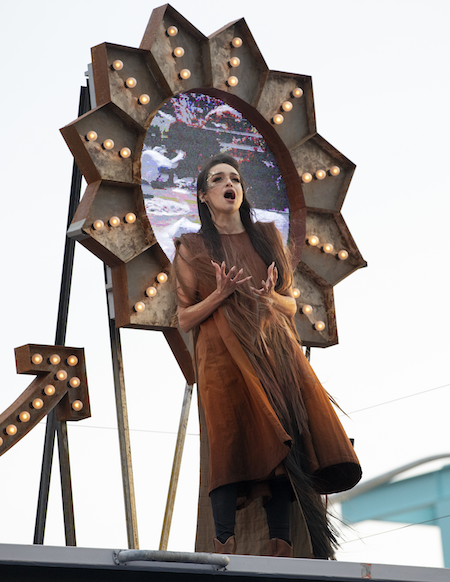 Facing lockdowns and shuttered theatres in the wake of the pandemic, acclaimed composer Mark Grey, along with a creative team of visual artists, sought to create a traveling chamber opera that would bring back live theatre. While developing Birds in the Moon, Grey knew he would need a durable microphone with superior sound quality capable of handling the unique conditions of the production’s stage setup. He found the solution he was looking for with DPA Microphones’ 6061 CORE Omnidirectional Subminiature and 4099 Instrument Microphones.

Birds in the Moon is a traveling chamber opera built into a state-of-the-art shipping container capable of bringing performing arts to locations where theatrical experiences are often sparse or unavailable. The container is designed as a multi-use performance space, suitable for showing films, presentations, visual exhibits, small theatrical works, concerts and chamber operas. The entire container can be utilised, with the side dropping down to create a stage extension and the roof accessible for performers.

For Birds in the Moon, Grey employs two 6061 CORE mics and four 4099 instrument mics. “The actor is a spoken role, the soprano is a sung role and those are both using 6061s,” he says. “The string quartet, which is the live music that supports the cast, uses the 4099s with the respective instrument clips for two violins, one viola and a cello. The DPA microphones that we are using not only sound amazing, but they hold up incredibly well to the outdoor conditions they are subjected to. They are far superior to anything else out there.”

“I have used DPA Microphones for decades,” adds Grey. “The brand has been my go-to microphone for opera singers. For this production, I wanted more of a cardioid microphone and the 6061 suited the purpose. Despite being an omnidirectional microphone, the perception of the sound produced by the 6061 makes it a little more precise and theatrical for operatic sounds. It offers a much tighter pattern of sound while helping to keep ambient sound away.”

During the show, the performers are walking around and inside the container, which is surrounded by loudspeakers. “In order to combat the potential reverberance from the shipping container, we selected the 6061 CORE Omni, which gives us much better gain-before-feedback for this environment. From a theatrical sound design standpoint, we have a more amplified sound, which needs microphones that can handle this, and the DPAs do a wonderful job.”

Grey deployed the DPA microphones alongside Meyer Sound’s new Spacemap Go, a control technology for spatialised sound. According to Grey, “Spacemap Go is an iPad app that allows us to control live microphones and multi-channel playback and spatialise them around our shipping container set,” he explains. “It works great with DPA microphones and allows me to move the sound, for example, from the 4099s around the space and get a very high-quality string quartet sound. The integration of those two worlds fits really well together. With the addition of the shipping container’s cantilever wings, instead of surround sound it’s more like a very wide panoramic stereo giving the audience the perception of a more horizontal picture. This is actually really great for us because when we start to move the microphones around in the space, you really feel like, ‘wow, that just snapped the sound over to stage right or stage left’.”

Grey has been very happy with his choice of DPA once again. “In the end, the reason we chose the CORE 6061 for Birds in the Moon was the durability of the microphone and superior sound quality,” he adds. “The mic also features the impressive new CORE by DPA technology, which the company has developed and sounds great.”

In addition to Birds in the Moon, the shipping container stage has also been used by the New York Philharmonic. “As one of the great orchestras of the world, there is a standard of quality that the NY Philharmonic expects,” says Cath Brittan, Birds in the Moon producer. “It is very important that we present that to the New York Philharmonic so that they have confidence when they perform live, and the DPA microphones do just that!”