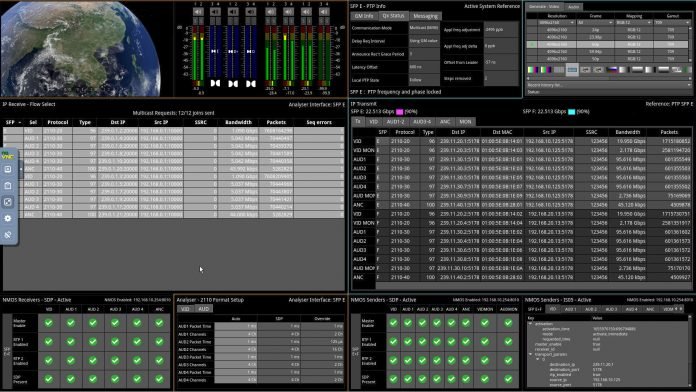 PHABRIX is pleased to announce the inclusion of browser-based remote access and improved audio functionality in the latest release (V4.7) for its Qx and QxL Series rasterisers. The newest update – which will be showcased at the IBC Show 2022 in September (stand 10.C01) – also offers an optional EUHD License for the QxL Series, enabling the units to generate and receive ST 2110-20 flows (up to 4K60P 444:12-bit) simultaneously.

Following on the heels of a V4.6 announcement in April 2022, the Qx and QxL V4.7 release heralds a host of notable product improvements. Headlining the latest release is an upgrade to the Linux OS Kernel that allows standard browser based remote access to the user interface using noVNC. As a result, there is no longer a requirement to install a separate application to remotely access Qx/QxL Series products.

V4.7 also introduces several major enhancements to the audio functionality of the Qx and QxL products, including the ability to receive up to four independent 32-channel ST 2110-30/-31 flows simultaneously under NMOS control. Users can also take advantage of a new ‘Audio Group Mode’ Metering feature that allows a single 16-channel audio meter to analyse one group of audio (4 channels) from each of up to four selected audio streams. Many existing IP systems are configured this way.

In addition, the new release yields an optional extended EUHD license for the QxL Series rasterisers, enabling the units to simultaneously generate and receive ST 2110-20 flows up to 4K60P 444:12-bit. Additionally, it is now possible to select an ST2022-6 flow in IP-2110 ‘boot mode’ and undertake fundamental flow analysis such as 2022-7 status, interpacket timing, sequence error assessments, and statistics.

Reflecting on the V4.7 release, which also includes a new Store Last Capture option that enables the last PCAP file held in the unit’s memory to be saved to a USB stick, PHABRIX Product Manager Prinyar Boon comments: “Long-term PHABRIX Qx and QxL Series customers will be aware of our commitment to frequent, meaningful upgrades that deliver major improvements in terms of system performance and additional capabilities. The V4.7 release is no exception and brings a host of significant enhancements to our market-leading rasterisers.”