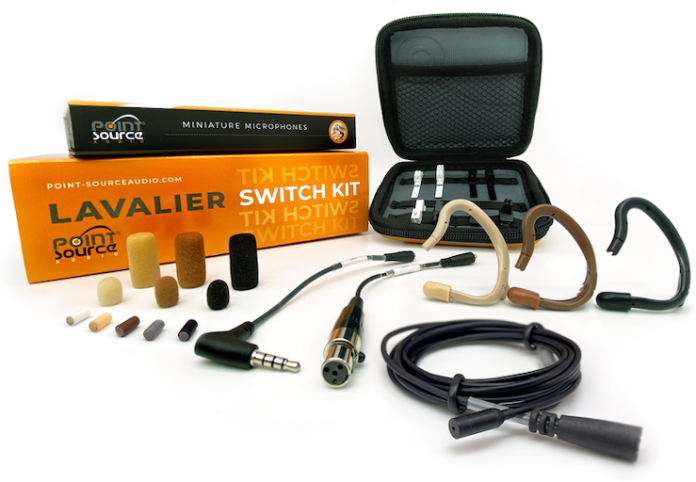 “The gardening host I work with is often performing quite physical tasks so for some years, I’ve been concealing the microphone into his mop of curly hair using wig and hair clips,” explains MacGregor. “This takes time and often requires readjusting throughout the shoot. So when the Point Source Audio LAVALIER SWITCH KIT became available, I thought, ‘that’s going to make life so much easier.’ I’ve probably got a dozen different methods of mounting lav mics and this has added another great option.”

MacGregor’s instinct has proven accurate as the EMBRACE microphone configuration has already served on three successive shoots with the presenter.

“It has made things a lot easier to manage,” he states. “I’m no longer constantly going up and fiddling with the talent’s hair and having to put the clips back in! Also with his role, it’s very physical – he could be digging holes with a spade, sawing stuff, using secateurs, cutting branches, very physical stuff; so the Earmount, in particular, does a really good job at holding everything in place and that’s definitely improved my workflow.”

Perhaps most importantly, the talent has also been happy with the change MacGregor has made. “He really likes it as well; he found it so comfortable that he forgot he was wired up,” reveals MacGregor. “He says it’s just the right fit for him as the old miking solution can pull at his hair when I’m putting the clips in. He was really positive about it.”

“It’s particularly good for miking women with plenty of long hair,” he continues. “Often, when you’re trying to find the right way to place a mic on them, it can be a bit creepy for them. But EMBRACE limits the invasion of personal space, which is good. It’ll definitely become a part of my kit in the field.”

While the EMBRACE mounting solution first attracted MacGregor to the LAVALIER SWITCH KIT, he is also pleased by the IP 57-rated omnidirectional 4mm lavalier. “I think the Point Source Audio lav is a good mic,” he states. “It’s going to give me kind of an extra audio piece that I can deploy.”

Now familiar with the advantages of the LAVALIER SWITCH KIT to location sound mixers, MacGregor concludes: “I think Point Source Audio has really hit the mark with EMBRACE. I like the idea that they don’t float about – they stay on mic as the mic is always aimed to the mouth. So, it’s got a lot of positive points for me from a sound recording perspective.”