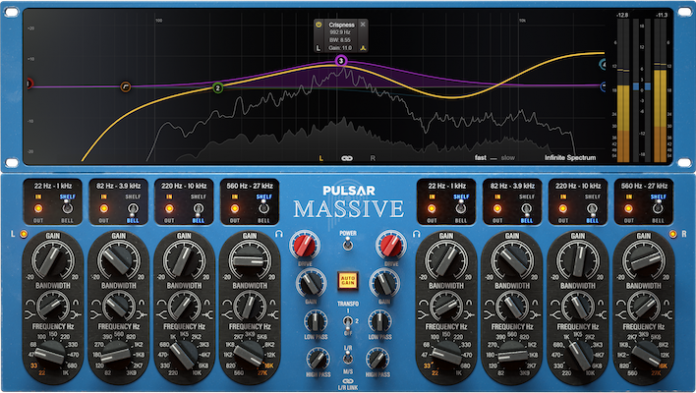 Pulsar Audio, based in France and Plugivery Distribution, today proudly announce Pulsar Massive, an emulation of the Manley Massive Passive EQ. Musical and intuitive, Massive is a must-have for mixing and mastering.

Pulsar Massive is an emulation of the Manley Massive Passive EQ that is present in almost every mastering studio in the world. This machine was designed as a synthesis of the best passive equalisers of the last 70 years, and several distinct features in the design give it an absolutely unique sound.

First of all, the fully parallel topology of the EQ gives completely different kind of response to a digital equaliser with the same settings. A parallel equaliser’s tonal corrections aren’t cumulative, but tend to interact with each other, resulting in a more intuitive and fluid way to shape the frequency spectrum.

The whole equalisation circuit of the original hardware is passive, and therefore has several inductors. These inductors, machined and wound specifically by the manufacturer, are responsible for a creamy, non-linear and organic sound due to the magnetic saturation they introduce.

Finally, the input, output, and internal gain stages are entirely tube and transformer operated, providing another step of warm and organic coloration.

Pulsar Audio’s software meticulously reproduces all these important aspects of the original hardware, but also offers an interface inspired by its ergonomics, which were much appreciated by its users.

But they have taken Massive even further, adding all the key features you would expect from a modern, versatile EQ plug-in, including visual curve editing for a fast workflow and a drive parameter to push the inductor and tube saturation stages harder for more vibe.

IMPROVING ON A CLASSIC

Pulsar Massive comes with a complete on-screen curve editor and spectrum analyser. This best-of-both-world approach gives an accurate overview of your EQ changes while highlighting the singular behaviours of the original unit. The easy-to-use graphic interface allows a fast and radical workflow for mixing applications.

The Drive control allows usage of the plug-in at internal levels where the analog vibe of the original unit is unusual and musical. Pulsar Massive’s accurate models of transformers, tubes, and inductors produce large amounts of harmonics and non-linearities. All coupled together, these are responsible for the subtle, dynamic and program-dependent low-end compression beloved by generations of sound engineers.

Pulsar Massive is a component-accurate model of the original unit, perfectly emulating its parallel EQ design and the unique sound-sculpting feeling. With parallel EQ, band gains don’t accumulate as in most other EQs, but rather recombine to produce natural-sounding corrections. The Pultec-like low shelving filters introduced allow generous and tight low end, even at extreme boost settings. The high shelf filter provides a pristine top end and air without harshness.

Pulsar Massive takes full advantage of modern CPUs to do more with less. Despite the tremendous amount of complexity in the audio algorithms you’ll be able to use dozens of instances even on modest configurations. The resizable interface and wise choice of modern features will make Pulsar Massive your go-to colour-EQ.