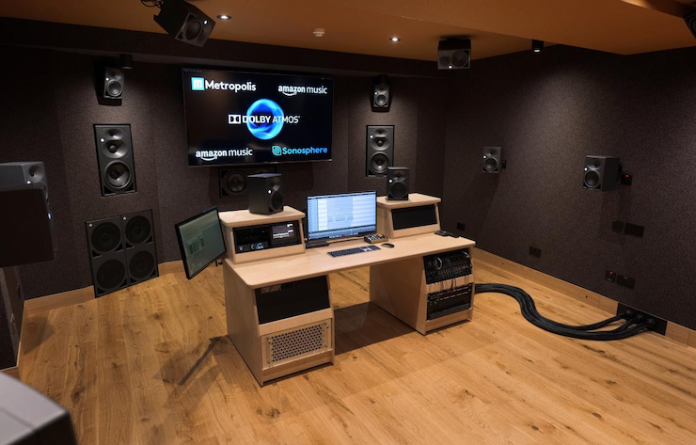 “The plan was to make the studio as versatile as possible”, states Sonosphere Commercial Director Jamie Gosney. “We started out looking at building a room for podcasting and immersive content creation for games and other VR simulations. However, in terms of the music market, Dolby Atmos is very much the standard. So we decided to ‘have our cake and eat it’, and build a room to fully meet the Atmos specifications: an immersive monitoring environment capable of 11.1.8 Dolby Atmos, currently the highest Dolby resolution studio in the country. The room has been equipped for all possible formats, including having a Dolby Atmos Mastering Suite server. ”Three Neumann KH 420 tri-amplified monitors are soffit-mounted to the front wall (with one KH 420 horizontal, beneath the video screen). Twin Neumann KH 870 subwoofers flank the three-way monitors, with low frequency response down to 18Hz.

A key mission was to ensure clean and extended low frequency from the twin subwoofers, with the required isolation to accurately judge tone-shaping a full octave below the effective range of many monitoring systems. Part of the mix room construction involved nearly two tons of sand to isolate the back wall, which adjoins another studio at Metropolis. Surround monitoring is handled by 17 Neumann KH 120 compact bi-amplified studio monitors, renowned for uniformity between units, and with a ±1.0dB linearity deviation between 100Hz–10kHz.

A key member of the Sonosphere studio team is mix engineer Phil Wright, well known as an expert in mixing live concert sound; his credits range from Paul McCartney, the RPO, Brian May and Benny Andersson, through the English National Ballet and Katherine Jenkins, and include broadcast mixes for Children In Need and Comic Relief 2020, Lianne La Havas and the BBC Symphony Orchestra. “The whole point of Atmos is that it is loudspeaker system agnostic,” Wright explains, “you mix one master file, called a Dolby Atmos Master File (DAMF). This is used to deliver the content to the end-user and then the end-user’s equipment plays a version of the content suitable for the equipment attached. You might have a completely discreet 7.1.4 cinema system – or a soundbar – the Atmos file can be decoded to best reflect the gear you own.”

Wright explains a design philosophy aimed at enabling mix work not only for Dolby Atmos, but for any immersive format. “We decided on three loudspeakers across the back wall, with all the loudspeakers around the room arrayed at 30° of separation to each other, so the setup was completely symmetrical for doing third-order [high-order Ambisonic] work. Atmos is more ‘front-centric’ so one of the rear loudspeakers will not be in use, and two of the others will be electronically adjusted for Dolby using a DAD (Digital Audio Denmark) AX32 monitor controller. The AX32 enables any number of virtual room presets to be optimised for different immersive formats.”

Part of the new ‘hub studio’ approach includes freedom from dependence on any particular mix hardware. “Jamie has designed this beautiful DAW workstation that’s on a three-metre umbilical to the wall,” reveals Wright, “so for a DAW-based workflow, you can sit with Pro Tools, Logic, Reaper or the client’s DAW of choice in the sweet spot in the centre of the room. When we have a ‘live’ job, or a client whose preferred workflow is a mixer, then we take the locks off and wheel the DAW to the side of the room at 90° to the engineer.”

“One of the other reasons we decided not to put a permanent console in is because there’s been quite a bit of interest from theatre designers – who would bring their own desk in,” adds Gosney. “When we were designing the room, we consulted with a number of live sound engineers, concert system and theatres designers, who, normally, have not been able to set up or programme their immersive systems until they are in a rehearsal rooms or a venue. As a result, we’ve focused on creating benchmark acoustics, with a central immersive listening position served by 22 loudspeakers.

This means that any designer of almost any show can set up in the room and programme their show on our system. They can work ‘in-the-box’, or on any digital console for theatre, broadcast, studio tracking, mixing or postproduction project.”

The new studio adds an immersive dimension to Metropolis’ comprehensive array of four recording studios and five mastering rooms. The facility is already well known for music, with two thirds of 2021’s domestic Brit Award Winners having recorded there. There are many opportunities in the pipeline for the new studio, with streaming and delivery options provided by the Sonosphere team.

Sonosphere commercial director Jamie Gosney concludes: “There is already a significant order book for the room in terms of record labels, who want well-known catalogue content remixed in Atmos so they can add it to HD streaming services. We are also in talks with a number of live venues, production companies and promotors as the studio can be very easily attached, via fibre, to virtually any venue in the country and used as a live broadcast and streaming hub – thus eliminating the need for production companies to park large OB vehicles outside their venues. We also have the ability to handle soundtracks and postproduction for the film industry. The possibilities are truly endless.”