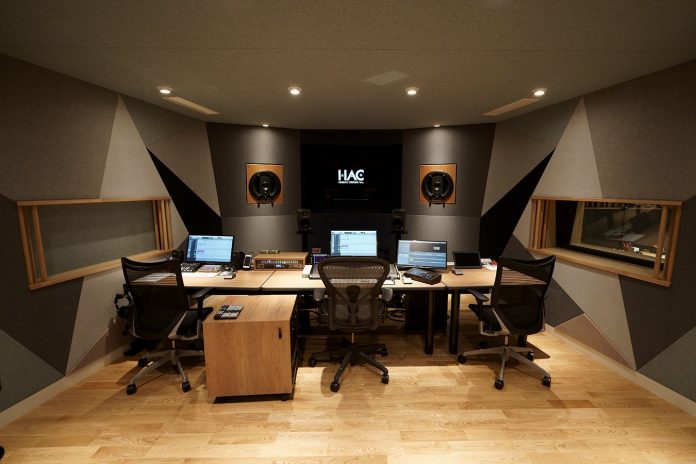 HAC Studio, part of Humax Cinema Co., Ltd. is a long-established post-production company founded in 1995. With its various studio facilities located among multiple buildings, HAC Studio relies on the TASCAM ML-32D 32-channel Analog/Dante Converter for audio production between its studio location and the company’s main building, which is located across the street. Being involved in a wide range of projects, including music videos, live concert footage, TV commercials, movies, drama series, and projects extended to the production and delivery of web and promotional movies, the ability to play, monitor, and record audio within multiple studios is a crucial aspect of the day-to-day operations.

HAC’s MA-4 Studio, established in 2019, was designed for efficient, time-saving transfer of video data such as QuickTime between studios to expedite editing. The studio’s well-maintained and neatly spaced infrastructure provides both engineers and clients a comfortable listening/production experience. With MA-4 Studio’s ‘1 floor per client’ concept, they offer plenty of room for creativity. Although MA-4 Studio is in a building across an intersection from the main studio’s complex, mutually connecting both studio’s servers with dark fibre made a great improvement in reducing the time required to copy and transfer data between studios, which previously could take several hours – depending on the nature of the content.

The MA-4 Studio has a narration booth where recordings with upwards of four people is possible. Talk-back and monitoring operations are accomplished with the TASCAM ML-32D, which converts analog signals into Dante. Together with AVID’s MTRX audio interface, DAW I/O routing and management of each post-production process is smartly designed for maximum flexibility.

Further, there were concerns related to load capacity and ceiling height, as the MA-4 Studio itself is located on the 3rd floor of an office building. By taking advantage of the TASCAM ML-32D Dante capability and combining multiple channels into a single LAN cable, there was no need to route large numbers of analog cables. This resulted in the elimination of physical considerations such as weight limitations.

In addition to its use of the TASCAM ML-32D, HAC’s MA-4 Studio routinely makes use of additional TASCAM products. The TASCAM DA-3000 High Resolution Stereo Master Recorder and AD/DA Converter is the facility’s go-to device for capturing stereo PCM/DSD recordings at high sampling frequencies. Equally notable, TASCAM AV-P250 power distributor/conditioner units are deployed throughout the facility while the TASCAM DV-RA1000 High-Resolution DVD Master Recorder is yet another one of the studio’s favorite tools. Additionally, the TASCAM VS-R264 and VS-R265 Streamer/Recorder units are high on the company’s interest list, as they also manage VTuber events in their group movie theaters.